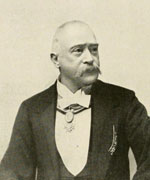 born: 13 April 1830
died: 15 January 1904
country: Belgium
Eduard Lassen was born in Copenhagen in 1830, only three years after Beethoven’s death. When he was two years old his parents moved to Brussels, where he would be admitted to the Conservatoire at the age of twelve. He won prizes in piano (1844) and composition (1847), then, in 1851, the Belgian Prix de Rome (created in 1832, modelled on the much older French version, and awarded in four categories). Whilst touring widely throughout Germany and Italy he met Liszt and Spohr. Lassen returned to Brussels in 1855, where a hoped-for production of his first opera Le roi Edgard did not materialize; two years later, however, Liszt mounted a remodelled version of the work in Weimar. Lassen’s subsequent operas achieved only brief success, but his music for Faust (1876) proved to be more enduringly popular and was admired by Liszt.

Lassen developed a fine reputation as a conductor. As music director at Weimar, Liszt recommended that Lassen should succeed him in 1858, to be responsible for both the opera house and the court orchestra. Lassen’s long tenure extended until his retirement in 1895. He conducted the premiere of Saint-Saëns’s Samson et Dalila and the first Weimar performance of Tristan und Isolde. The American pianist Amy Fay, who later became Liszt’s pupil, wrote, ‘[Lassen] is a beautiful pianist and composer himself, as well as a splendid conductor’. From 1889 to 1894, Lassen’s assistant at Weimar was the young Richard Strauss.

Lassen’s songs—of which there are more than three hundred—were generally regarded as his most successful works, many of them popular in the latter half of the nineteenth century. He also composed two symphonies, piano pieces, and choral, chamber and instrumental works. Through his association with the Weimar Court Theatre, he provided incidental music for several productions. Mahler is known to have conducted Lassen’s score for Faust. Lassen’s close connection with Liszt led to his arrangement of Vallée d’Obermann for piano trio (newly entitled Tristia), while Liszt himself transcribed two of Lassen’s songs and a few numbers from his incidental music. Lassen died in January 1904, a few months before Dvořák.