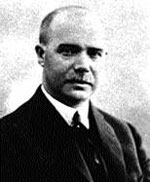 born: 29 April 1872
died: 24 December 1932
country: Norway
Eyvind Alnæs (1872–1932) played an important role in the musical life of Oslo during the first part of the twentieth century. For thirty-seven years he was an organist in several churches, ending his days as organist and precentor at the cathedral in Oslo. At the beginning of the twentieth century it was still impossible to earn a living as a full-time church musician in Norway, so Alnæs supplemented his income by working in different musical fields. He conducted several choirs and also became the chairman of the Norwegian Composers’ Association and a member of the board of TONO, the Norwegian performing rights society. Alnæs was a renowned pianist and accompanist; as part of his piano and organ teaching he published piano and organ methods and practical collections of music.

Alnæs received his musical education at the private music conservatory in Oslo. He continued his studies in Leipzig, where he was taught composition by Carl Reinecke. After the premiere of his first symphony in 1896 he received a scholarship giving him the opportunity to study composition with Julius Ruthardt in Berlin. The first results of his time in Berlin were the Variations symphoniques for orchestra (1898) and several smaller piano pieces. A concert presenting his orchestral music in Leipzig in 1900 revealed his ambitions as a composer, but like Edvard Grieg he was forced to undertake a range of musical tasks which took up much of the time he could devote to composing. Twenty-four of his forty-five opuses are collections of songs, and Alnæs became one of Scandinavia’s most performed song composers. His piano music, which mostly consists of poetic miniatures, also has a dominant place in his output, demonstrating that Alnæs aimed to compose music that his publishers would find marketable. Alnæs also composed chamber and choral music, but after 1900 the piano concerto and the second symphony are the only works on a larger scale.

from notes by Harald Herresthal © 2007