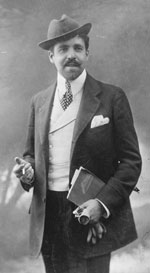 born: 9 August 1874
died: 28 January 1947
country: France
Reynaldo Hahn was born on 9 August 1874 in Caracas, Venezuela, the youngest of twelve children. His first language was Spanish. By the age of three, however, his family had moved to Paris and the precocious six-year old was invited to sing operetta numbers at the salon of the Princess Mathilde (cousin of Napoleon III), accompanying himself at the piano. It was this unusual facility for which he became celebrated as an adult and which the writer Francis Pott suggests ‘undoubtedly contributed to a benign underestimation of his talents: the image of the singer seated at the keyboard was redolent of a dilettantism all too likely to engender preconceptions beyond the sphere of the songs for which he was celebrated, and it is perhaps accordingly that his more formal concert output has suffered.’

Hahn entered the Paris Conservatoire at the age of eleven, studying solfège, harmony and counterpoint, composition and piano. Hahn had already shown unusual compositional facility by the age of seventeen, when his teacher Massenet (whose suave and fluent lyricism often seems to mark Hahn’s own style) introduced him to the publishers Heugel, who over the course of his career were to issue many of Hahn’s song collections. Despite considerable success with his song writing, it was Hahn’s attraction to the stage, to opera and more specifically operetta (with its greater popular appeal), for which he became best known.

Hahn was a connoisseur of literature and in 1894 met Marcel Proust. The famous novelist was to draw upon Hahn’s character for his portrait of the musician Santeuil. The romantic relationship which developed between them over many years remained strong until Proust’s death in 1922. Hahn wrote extensively as a music critic but the literary friendship with Proust may well have been the catalyst for his many extant eloquent reminiscences of artistic and social celebrities.

Hahn became noted as a conductor and as a particularly sensitive interpreter of Mozart (the subject of one of his lighter stage works), with whose music he felt a strong affinity. His musical tastes ranged from Palestrina through Haydn (whose music he found ‘exquisite, powdered and occasionally provocative’) to Ravel, but strangely excluded Debussy, whose music he derided. He was fond of Wagner but little of his own music reflects the influence. Beethoven he said ‘transports us by the mere vibration of his soul’. He reserved some of his most purple prose for Schumann: ‘There is no emotion that he has not experienced: all the phenomena of nature are familiar to him—moonlight bright or hazy, sunrise and sunset, confused shadows, dull weather, radiant weather, fresh scents, the majesty of evening, swirling mists, powdery snow—he has known them all and can impart to us the thousand-and-one emotions associated with them. His Lieder encompass … the entire depth of expression and sincerity of emotion with respect for the [poem’s] meaning and delicacy of touch. What a prodigious feeling for literature he had! For me, obsessed as I am with the fusion of literature and music, that is the quality that counts first and foremost.’

Endowed with easy linguistic ability through his parentage and childhood migration to Europe, Hahn was widely travelled. In 1940, on account of his part-Jewish ancestry, he fled Paris for Cannes but returned in 1945 to take up musical direction of L’Opéra. Despite plainly missing the intellectual fulfilment of his romance with Proust half a century earlier, he remained a flamboyant personality right up to his short and final illness, and he died in January 1947.