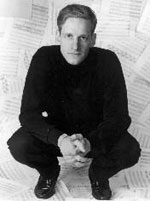 born: 22 February 1961
country: USA
Lowell Liebermann was born in New York City on 22 February 1961. He began piano studies when he was eight and formal composition studies when he was fourteen. His Piano Sonata, Op 1, was written when he was fifteen, and it was with this piece that he made his performing debut a year later at Carnegie Recital Hall. He graduated from Juilliard School in 1987 with a Doctor of Musical Arts Degree. His teachers included David Diamond and Vincent Persichetti in composition and Jacob Lateiner in piano. He studied conducting with Laszlo Halasz and continues to be active as pianist and conductor both in concerts and recordings.

Liebermann's Second Piano Concerto, commissioned by the Steinway Foundation and premièred by Stephen Hough and the National Symphony conducted by Mstislav Rostropovich, was called by the Baltimore Sun 'perhaps the best piece in the genre since Samuel Barber's Concerto'. His Flute Concerto was commissioned by James Galway and first performed by him with the Saint Louis Symphony under Leonard Slatkin. In May 1996 his two-act opera based on Oscar Wilde's The Picture of Dorian Gray was premiered by L'Opéra de Monte Carlo, who commissioned the work, to great popular and critical acclaim. This opera was not only the first American opera commissioned by them, but also the first to be performed there.

Mr Liebermann's many honours include a Charles Ives Fellowship from the American Academy and Institute of Arts and Letters and awards from ASCAP and BMI. In 1996 he was nominated for the Prix Oscar Wilde by L'Association Oscar Wilde for his opera.