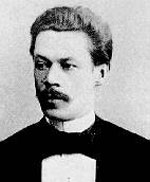 born: 12 July 1861
died: 25 February 1906
country: Russia
Anton Stepanovich Arensky was a brief but brilliant meteor over the musical world of pre-revolutionary Russia. Although he died at the early age of forty-five he composed, in a career that spanned barely twenty-five years, three operas, a ballet, several orchestral works (including a piano concerto, a violin concerto and two symphonies), chamber music, many songs, and a large body of choral work, in addition to an extensive, though now sadly neglected, catalogue of works for his own instrument, the piano. He never married and, for the most part, the details of his personal life are unrecorded, yet he moved in the highest musical circles and was accorded many honours in his lifetime.

Arensky was born in Novgorod on 12 July 1861 and became one of the most successful composers and pianists in nineteenth-century Russia. Initially taught by his mother, an amateur pianist, and encouraged by his father, a doctor and keen cellist, he entered the St Petersburg Conservatory in 1879.

His composition teacher at the Conservatory was Rimsky-Korsakov who must have been impressed by the young Arensky as he entrusted his student with a share of preparing his vocal score of The Snow Maiden. In later years he revised his opinion of Arensky’s talent, and unfortunately it is Rimsky-Korsakov’s cold pronouncement in his memoirs My Musical Life that ‘he will soon be forgotten’ which has lent ammunition to Arensky’s detractors. In fact Arensky was enormously successful and respected in his lifetime and it was probably this very success which soured relations with his former teacher.

Nineteenth-century musical Russia was full of cliques and intrigues. In 1883 Balakirev took over the immensely important and well-paid post of Director of the Imperial Chapel, and Rimsky-Korsakov became his assistant. Meanwhile the young Arensky, having graduated with the Gold Medal for composition from St Petersburg Conservatory, was appointed Professor of Harmony and Counterpoint at the Moscow Conservatory. All might have been well had not Rimsky-Korsakov later fallen out with Balakirev. Rimsky-Korsakov became so unhappy at the Imperial Chapel that in November 1893 he resigned his position. The stress of working with the overbearing Balakirev had made him depressed and ill; also his daughter had died only a few months before, and this period marked one of the lowest points in the composer’s life. The following year, however, Balakirev retired as Director and on his recommendation Arensky was offered the post. It is from this point that Rimsky-Korsakov seems to have decided that Arensky was second-rate!

Whilst a Professor at the Moscow Conservatory Arensky won many friends and admirers, notably Tchaikovsky and Taneyev. Among his pupils were Rachmaninov, Scriabin, Glière and Gretchaninov. As a composer he had a steady stream of successes, most notably his first opera Son na Volge (A Dream on the Volga). His appointment as Director of the Imperial Chapel lent him prestige, and on his retirement in 1901 he was given a special pension of 6000 roubles a year. The rest of his life was spent composing and giving concerts; he was successful as both a pianist and a conductor. For most of his life he had been a heavy drinker and gambler. Finally, in February 1906, with his health undermined, he contracted tuberculosis and died at Terioki in Finland.