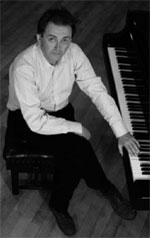 born: 1957
country: United Kingdom
Francis Pott was born in 1957 and began his musical life as a chorister at New College, Oxford. He held open music scholarships at Winchester College and Magdalene College, Cambridge, studying at the latter with Robin Holloway and Hugh Wood while also pursuing piano studies as a private pupil of Hamish Milne in London. For many years John Bennett Lecturer in Music at St Hilda’s College, Oxford, he was appointed administrative Head of Music at London College of Music & Media in 2001, subsequently becoming its Head of both Composition and Research Development in Music, Media and Creative Technologies. He was also a member of Winchester Cathedral Choir under David Hill from 1991 until 2001, touring the USA, Brazil, France, Germany, the Netherlands and Norway and participating in many CD releases and televised concerts during that period.

Francis Pott has received many national awards as a composer and in 1997 gained First Prize in the second S S Prokofiev International Composing Competition in Moscow. His works have been heard in at least eighteen countries worldwide, broadcast in Britain, the USA, Canada and the Czech Republic, issued extensively on CD and published by four major houses in the UK. His monumental Organ Symphony Christus was described in the national press in 1992 as ‘one of the most important organ works of our century’, and again in The Times in 1999 as ‘an astonishingly original composition, compelling in its structural logic and exhilarating in performance: a stupendous achievement’. In the same year and in the same columns his oratorio A song on the end of the world, named after a Czeslaw Milosz poem from Nazi-occupied Warsaw and written as the last pre-millennial Elgar Commission of the Three Choirs Festival at Worcester, was hailed as ‘thrilling, apocalyptic and profoundly affecting’. His piano music is extensively championed by the Russian-Canadian virtuoso, Alexander Tselyakov, and his organ works by the internationally acclaimed British artist, Jeremy Filsell.

Francis remains active as a pianist and accompanist, uniting this with both composition and academic research. He is writing a major critical study of the works of the Russian composer Nikolai Medtner, under contract to Ashgate Press, and is the only Medtner scholar ever to have examined the major manuscript sources in both Ottawa and Moscow as well as London.