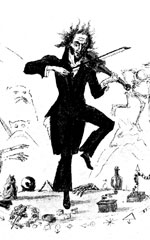 'Paganini: the Master of Men'. Engraving by J P Lyser

born: 27 October 1782
died: 27 May 1840
country: Italy
The most famous violinist in history, Nicolò Paganini did not start to play the violin before the age of seven. His first instrument was actually the mandolin, and he was subsequently to be very proficient on the guitar. Born in Genoa on 27 October 1782, he was originally taught by his father, an overbearing man who practically starved him into continuous practising after Paganini’s mother told him of a dream in which an angel had promised their son would become the greatest violinist in the world. He made prodigious progress, studying with the theatre violinist Cervetto and the maestro di cappella of Genoa Cathedral, Giacomo Costa. But it was a visit to Genoa in 1794 by the dazzling Polish violinist August Duranowski that inspired him to attempt technical feats on the instrument that had hitherto been unknown in Italy. At the age of twelve he was taken to Parma by his father, and there he mainly studied composition with Paer, as he seemed to have already absorbed everything that could be known about violin playing. He received encouragement from Kreutzer and studied the violin works of other composers, notably Pietro Locatelli’s L’arte del violino, and this along with his own experiences of writing music inspired him to push further the limits of violin technique.

Paganini moved to Lucca with his brother at the age of eighteen, where he was shortly appointed to be the leader of the new national orchestra. When this was replaced by a court orchestra to serve the Princess Elisa Baciocchi (later Grand Duchess of Tuscany), who had been installed by her brother, Napoleon Bonaparte, as ruler of Lucca, Paganini was relegated to the second desk, but he was soon appointed as the court’s solo violinist. It was during this period that he started experimenting with the effects he could obtain by restricting himself to just two strings—and eventually to the G string only. At the same time he developed methods that would aid his virtuosity: as well as using unconvential tunings to simplify the fingering of intricate passagework, he flattened the bridge to make it easier to bow from one string to another, and used thinner strings that increased the brilliance of the sound and allowed higher harmonics.

Dissatisfied with the limitations of musical life at Lucca, Paganini abandoned the city in December 1809 to carve out a career as a solo instrumentalist. He travelled widely in Italy, and stunned audiences by his flamboyant and mesmerizing technique and appearance. He began to attract international attention, but he was comparatively unsuccessful in playing music by other composers and seems to have been reluctant to quit his native Italy until he could compose a repertoire that would display his performing skills to his satisfaction. It was in this situation that he started to compose the works for which he is now remembered, including the First Violin Concerto, which he premiered in Naples in 1819. The following year the publisher Ricordi issued Paganini’s first six opus numbers, beginning with the 24 Caprices Op 1. These were considered unplayable by most contemporary violinists.

After he had established himself both as a composer and as a phenomenal performer, in 1828, Paganini crossed the Alps with his son Achille and the boy’s mother, the singer Antonia Bianchi. Thus began the tour of Vienna, Prague, Germany, Paris and London that made his fame immortal. His repertoire was almost exclusively of his own compositions—unusual at the time—and he played entirely from memory. In fact, Paganini’s European career was relatively short. Though he found fame and fortune his health suffered seriously and he returned to Italy, settling for a time in Parma. However he resigned his post there and instead became involved in a doomed—because illegal—scheme to open a gambling casino in Paris. By the mid-1830s his concert-giving career was more or less over. Afterwards he became a dealer in musical instruments, and towards the end of his life lost his voice almost completely because of a paralysed larynx. He died in Nice in 1840; since he had refused the Last Rites during his illness he was refused burial in church, but in 1845 his remains were transferred to Parma through the good offices of the Duchess Marie-Louise of Austria and buried there two years later. Finally in 1876 they were transferred to his last resting place in Genoa.

A forerunner and inspirer of his younger contemporaries Chopin, Liszt and Berlioz, Paganini was the archetype of the virtuoso performer. His technique was so phenomenal, and his saturnine presence so magnetic, that he was popularly believed to be in league with the Devil. He communicated a new vision of what the violin could achieve. But perhaps if Paganini had not been such an extraordinary performer his achievements as a composer would have been appreciated more. In fact he was very far from being obsessed with technical brilliance for its own sake. He was an enthusiastic player of chamber music, particularly the quartets of Haydn, Mozart and Beethoven, while he recognized the genius of Berlioz, who famously wrote Harold in Italy for Paganini to play—on the viola. (Paganini declined to perform it, but gave Berlioz 20,000 francs for the piece.) 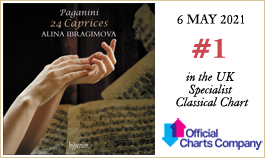