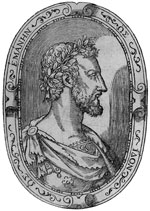 born: 1524
died: 1585
country: France
France’s greatest Renaissance poet was Pierre de Ronsard (1524–1585), a scholar and reformer of French verse techniques (a member of the famous brigade of poets known as La Pléiade) as well as an astonishingly original artist. Ronsard’s profound studies of Homer, Pindar, Horace and Petrarch were the foundation stones of a new French literature that abandoned medieval literary precepts in favour of the Greek and Roman classics. The poet’s fame was such that he traversed national and political boundaries, writing poems in honour of Charles IX of Spain, Catherine de Medici, Mary Queen of Scots (who sent him a gift from her captivity) as well as Mary’s enemy, Elizabeth I of England.