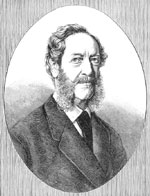 born: 1806
died: 1876
country: Austria
Anastasius Grün (pseudonym of Anton Alexander, Graf von Auersperg) was born in the old Austro-Hungarian empire but made his home in Vienna. Schubert, had he lived into the 1830s, might have collaborated with Grün, as with the poet Nikolaus Lenau (another pseudonym). Grün was born in Laibach, now Ljubljana in Yugoslavia, in 1806. His first significant publication was Der letzte Ritter, a historical verse epic, followed by Spaziergänge eines Wiener Poeten (1831) and Schutt (1835) which were critical of the Metternich regime. It was in order to avoid the interference of the secret police that Auersperg used a pseudonym. Eventually unmasked, he retired to his large estates in Carniola (Krain) and to less politically inspired writing: his Gedichte were published in 1837. Schumann would have been aware of his political stance. Grün went on to write comic poetry and to translate the Slovenian poetry of his own region. He was also knowledgeable about English language and literature. After the fall of Metternich he became increasingly involved in Austrian politics and by the 1860s was a fully-fledged member of the Establishment into which he had been born. Grün died in Graz in 1876.