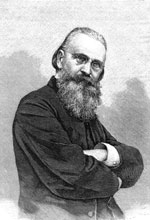 born: 1819
died: 1904
country: Austria
The poet Hermann Rollett was a native of Baden bei Wien and the son of a doctor. In his reminiscences, Begegnungen (‘Meetings’), he claims that on his way to school as a six-year-old in 1825 he caught a glimpse of Beethoven. At the age of ten he was often in the presence of Mendelssohn during one of that composer’s visits to Vienna. There are other names where the connections were more concrete: Schubert’s poetess Karoline Pichler was a patient of Rollett’s father and the aspiring poet came to know Grillparzer well. He also became a friend of the painter Moritz von Schwind (who illustrated one of Rollett’s poems) and one wonders whether the discussion ever turned to Schubert, one of the few Viennese eminences whom Rollett did not claim to have known. He travelled to Germany in 1844 and made contact with Justinus Kerner in Weinsburg whom he revered.

As a young man Rollett was a left-winger, a fiery advocate of press freedom and an opponent of Metternich. Such works as Kampflieder and Republikanisches Liederbuch (both 1848) would have made him a sympathetic figure to the Schumanns; it is perhaps for this reason that his novel Jucunde was welcomed into their household where the composer’s verdict on the poems therein was ‘sehr musikalische Gedichte’. During the 1840s the poet became less and less comfortable in his native land. Eventually he was forced to flee Austria and lived for a while as a so-called censorship-refugee in Germany. It was in Weimar in 1846 that he made the acquaintance of Hans Christian Andersen and Jenny Lind as they visited the graves of Goethe and Schiller. (His impressions of Andersen, whom he likened to a tall poppy in appearance, are sympathetic and forgiving of his egocentricities.) In 1851 he moved to Switzerland (where he came into contact with Wagner) and in 1854 returned to his home city where he was eventually appointed to a post as archivist of the city’s museums and lived out a life as a cultural historian, novelist and poet. He failed to achieve lasting fame and died in straitened circumstances.