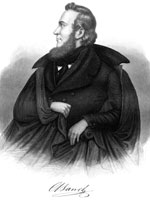 born: 27 May 1809
died: 28 December 1889
country: Germany
Though almost forgotten, Banck was a critic (on Schumann’s team at the Neue Zeitschrift für Musik), a singing teacher, and one of the foremost song-composers of the 1830s. He was born in Magdeburg and studied in Berlin with Bernhard Klein, Berger and Zelter. He was a famous editor of early music publishing editions of such composers as Scarlatti and Martini. In some of his songs he shows just how aware he is that he was working in a post-Schubertian world. His 1837 cycle Des Müllersburschen Liebesklage in Mond und Morgenliedern (‘The Miller Lad’s Love-Laments in Moon and Morning Songs’) takes Die schöne Müllerin as its inspiration, and his Des Leiermanns Liederbuch (1838/9) takes up the thread of the story of Winterreise where Schubert and Müller leave off—a kind of sequel, or Winterreise II.