born: 1643
died: 24 February 1704
country: France
Although hard facts about Charpentier’s life are scarce, we do know that in his twenties he spent some time in Rome, probably during the period 1665/6 to 1669. During his stay there he ‘studied music … under Carissimi, the most esteemed composer in Italy’ (Mercure Galant, March 1688). Charpentier would certainly have become immersed in the long-established Italian polychoral tradition, and it was surely this experience that inspired his own works for multiple choirs. As well as numerous pieces for two choirs, his output includes one for three, the Salve regina à trois chœurs, and one for four, the Messe à quatre chœurs.

Mass composition in late seventeenth-century France remained conservative; composers deliberately avoided the same modern features that they were by now using in the motet. Furthermore, Louis XIV’s personal dislike of sung Mass meant that composers working at the royal court did not need to write Masses at all. In this context, Charpentier’s eleven Masses are quite exceptional. They not only employ an up-to-date musical style but between them illustrate Charpentier’s own mantra that ‘diversity alone makes for all that is perfect’. For instance, alongside the well known Messe de minuit, which incorporates traditional French noël tunes, we find a Mass for women’s voices only (for the nuns of the convent Port-Royal), one for instruments alone, and the Messe à quatre chœurs, the distinguishing feature of which is clear from its title.

from notes by Shirley Thompson © 2004 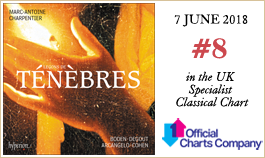