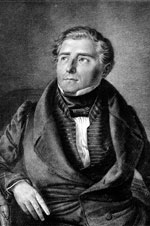 born: 30 November 1796
died: 20 April 1869
country: Germany
Born in the village of Löbejün, near Halle, just two months before Schubert, Carl Loewe has been aptly described as a medieval strolling minstrel transplanted to the Romantic age. As the star chorister in Köthen he had won the admiration, and the financial support, of Jérôme Bonaparte, King of Westphalia. He composed two of his most famous ballads, ‘Edward’ and ‘Erlkönig’, in 1817/18, while still a student in Halle. In 1820 his performances of ‘Erlkönig’ and other songs greatly impressed Goethe and his musical guru Carl Zelter in Weimar. Appointed music director in Stettin (present-day Szczecin) the same year, Loewe composed prolifically in all the main genres of the day: opera, oratorio, symphony, sonata, chamber music. But it was as a singer of his own songs that he became celebrated, first in the provincial capitals of Germany, and then on a wider international stage. In 1847 he visited London and sang at court, with Prince Albert turning the pages. The Viennese, who especially admired his ‘Erlkönig’, dubbed him ‘the north German Schubert’; and wherever he performed—sometimes sharing a recital with his second wife Auguste, a gifted soprano—he was acclaimed both for his imposing dramatic presence and his fine voice: a tenorish baritone of wide range, with a special facility in florid figuration and soft, high-lying music, whether playful or eerie.