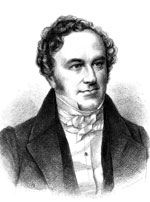 born: 22 November 1780
died: 14 December 1849
country: Germany
Kreutzer had a career that makes one dizzy in terms of its changes and upheavals. He was born in Swabia and his early career as an instrumentalist was in this region, as well as in Switzerland. He was twenty-four when he moved to Vienna and a performance of Salieri’s opera Palmyra opened his eyes to the possibility of music for the theatre. Kreutzer spent six years in Vienna where he studied with Albrechtsberger and performed as pianist and clarinettist at all the great salons. He left the city after an altercation with Joseph Weigl and returned to Stuttgart where he married and was appointed Hofkapellmeister. It was at this time, in Tübingen, that he met Ludwig Uhland who remained his favourite poet when it came to songs. Out of a total of 180 lieder he composed 92 settings of Uhland. (It was probably in deference to this well-known partnership that Schubert confined himself to only one Uhland setting—the famous Frühlingsglaube, D686.) Constantly writing operas, chamber music, church music and piano music, further engagements led him in a roundabout manner back to Vienna where he became the Kapellmeister of the Hofoper in 1822. He was partly responsible for considering Schubert’s operas Alfonso und Estrella and Fierrabras for production (they were not taken up). His own opera Libussa left Schubert cold according to a contemporary source, but Schubert took part in performances of Kreutzer’s male-voice quartets. After Schubert’s death Kreutzer became Music Director at the Josephstadt Theatre in Vienna where he had his greatest successes: his light-hearted operas Das Nachtlager in Granada and Der Verschwender from this time were his most enduring achievements. He continued to work on and off in Vienna until 1840, and then moved to Cologne. He was active to the end of his life in a constant round of musical positions, all the while lobbying on behalf of (as well as accompanying) his two daughters who had decent careers as singers.