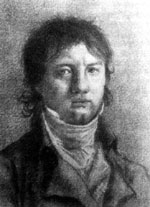 born: 27 October 1775
died: 2 December 1831
country: Germany
Goethe had known the name Eberwein in connection with music since his arrival in Weimar in 1775 when Alexander Bartholomäus Eberwein (1751–1811) was in charge of the town’s music. His two sons were Maximilian and Carl (1786–1868). It was the latter, a schoolfriend of Goethe’s son August, who had the closer connection with Goethe; he went to study with Zelter in Berlin, and saw and worked with the great poet almost on a daily basis—he even wrote music for Faust. His wife was the singer Henriette Hässler who performed in the Goethe household on numerous occasions. Max on the other hand escaped relatively early from what he may have regarded as the stifling confines of Wiemar; he was well travelled (Paris, Naples, Vienna, Berlin) and became a better, more individual, composer than his brother. He took up an appointment in Rudolstadt and although he composed a large number of operas there (he completed Goethe’s Claudine undeterred by the poet’s distancing himself from the project) there was very little reporting of his successes from this town in the musical press—a vital means of spreading the reputation of a composer. This had a damaging effect on the circulation of his music and very little of it reached print. A great deal of fine music of this epoch failed to survive. Every city and court possessed its own Kapellmeister and there were very few performances of new works in cities where they had not originated.