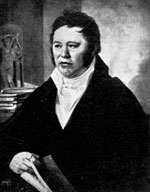 born: 17 April 1774
died: 3 April 1850
country: Bohemia
Tomášek was the leading composer in Prague during Schubert’s lifetime. Born in Bohemia but educated in Germany, his influence spread far beyond the borders of his home country. He was in touch with Haydn and Beethoven at different times of his life, and he corresponded with, and met, Goethe in the early 1820s. This was in connection with the nine volumes of settings of the poet’s poems that he had privately published thanks to the support of his patron Georg Grafen von Buqouy. There were forty-one Goethe songs in all (he had begun work on them in 1815, ending in 1820) with twenty-one of the texts also set by Schubert—although the composers would have been unaware of each other’s work at the time of composing. It was a crowning moment of Tomášek’s life to be able to perform his songs to Goethe himself in Eger, West Bohemia, in August 1822—he was both singer and pianist on this occasion. Tomášek was able to bask in the great man’s approbation that Schubert longed for, and never received. His piano music, published simultaneously in Leipzig and Vienna, concentrated on smaller musical forms (Eklogen, Rhapsodien, Dithyramben) and their artful construction, and contrast of major and minor tonalities, must have influenced Schubert’s Impromptus. Schubert’s strongest link in Vienna with Czech music and musical personalities was probably Jan Václav Voríšek (Worzichek), a composer colleague of Tomášek’s whom he certainly met on several occasions. Voríšek published two sets of Impromptus in 1822 and 1824, some time before the appearance of the Schubert works of that title.