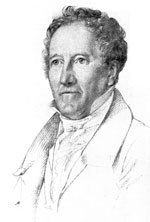 born: 10 August 1768
died: 19 November 1840
country: Austria
Vogl was hardly more than an amateur composer, but he was one of the most significant opera artists of his time; he also may claim the title of the first professional lieder singer. Schubert first heard him in Weigl’s Das Waisenhaus and then as Orestes in Gluck’s Iphigenie. It was some years before singer and composer met (in 1817), an interview arranged by Schober at Schubert’s request. At first the singer was lofty in his attitude, as one might expect of a famous theatrical personality, and he found it difficult at first to grasp Schubert’s musical significance in the light of his outward appearance. He quickly became the composer’s greatest admirer however, and took Schubert under his wing. This was of course enormously to his own advantage as Schubert’s arrival in his life opened up a new career of which no singer could have hitherto dreamed. On a number of occasions, above all in the summer of 1825 when the two enjoyed a long holiday together in Upper Austria, Vogl extended a helping hand to Schubert. His singing with composer as accompanist became the model for countless later partnerships in lieder history—theirs was the first of its kind. Vogl was also the first singer to present a complete performance of Winterreise. He was a man of immense general culture, well read in the classics; because of his love of Latin he was referred to as ‘rara avis’ (‘rare bird’, ‘Vogel’ meaning ‘bird’), and he was also fluent in the English language. There are three Masses and an Offertorium by Vogl conserved in the monastery at Kremsmünster.