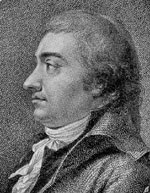 after a drawing by Hiemer

born: 10 January 1760
died: 27 January 1802
country: Germany
Johann Rudolf Zumsteeg was born in Stuttgart and spent his whole life there. Even geographically his work stands as a middle point between that of the Berlin school and Schubert. He attended the Carlsschule, the military academy founded by the notoriously dictatorial Duke Carl Eugen of Württemberg. The poet Friedrich Schiller knew Zumsteeg from the age of ten, and the two artists remained in close contact—a friendship sealed by the shared adversity of their miserable student years. Zumsteeg, a cellist by training (he wrote ten cello concertos), provided the first incidental music for Schiller’s Die Räuber in 1782; after this he gradually turned his attentions to song. He was music master at the Carlsschule between 1785 and 1794, although towards the end of this time he ascended to the post of Konzertmeister in charge of court music. As a result there was a great revival of Mozart’s operas in Stuttgart and Zumsteeg himself had moderate success as an opera-composer. Goethe met Zumsteeg once in Stuttgart, and Schiller persuaded the poet to mount a performance of one of Zumsteeg’s operas in Weimar for the benefit of the composer’s widow after her husband, still a young man, had died of a heart attack. A great deal of his music remains unprinted. Like Reichardt, Zumsteeg had a daughter, Emilie (1796–1857), who became a song-composer of note.