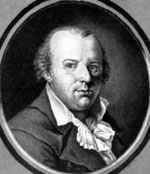 Engraving by B H Bendix

born: 25 November 1752
died: 27 June 1814
country: Germany
Johann Friedrich Reichardt was the greatest song-composer of his day, as well as a busy journalist and talented writer. His Vetraute Briefe aus Paris (1804) is one of the best books ever written by a composer. At the age of twenty-three (1775) he was appointed Hofkapellmeister to the Prussian court in Potsdam, a post he held for fifteen years until his radical political beliefs led to his dismissal. Little deterred, he moved to Halle where his home in nearby Giebichenstein became a focal point for musicians and poets such as Tieck, Novalis, Brentano and Arnim. Reichardt began to set Goethe’s poetry as early as 1772 and in 1790 planned to issue a six-volume collection entitled Musik zu Goethes Werken; he visited Goethe in 1789 taking with him a setting of Claudine von Villa Bella (also composed by Schubert in 1815). Reichardt soon replaced Philipp Christoph Kayser (1755–1823), who was not equal to Goethe’s untiring demands for operatic collaboration, in the role of favoured musician; the poet and his new composer planned a large opera on a subject from Ossian. Despite Goethe’s fame, Reichardt was very much his own man; Goethe could not approve of his sympathy for the French Revolution and this eventually led to an estrangement between the two. Reichardt was attacked in the Goethe–Schiller collaboration Xenien (1797) as an ostrich, a half-bird who was unable to fly, always on the move and accomplishing little. Some years later contact was resumed, and Goethe visited Giebichenstein on a number of occasions; nevertheless, by 1804 Zelter had became Goethe’s preferred musical adviser, and the poet’s relationship with Reichardt came to a definitive end in 1810. He composed some 150 Goethe settings, but for the remainder of his 1500 lieder he numbered Schiller, Hölty, Claudius and Klopstock among his inspirations. In fact the range of poetry he set, and the sheer number of poets, far exceeds Schubert’s record, or that of any other song-composer known to me. His many song collections (with such titles as Lieder der Liebe und der Einsamkeit) are particularly beautiful publications, exquisitely produced with poem and music printed side by side, and impossibly expensive for the modern collector. Unfortunately there is no modern edition of Reichardt’s songs, other than the Goethe settings. Mendelssohn, despite his strong link with Zelter, remained convinced that Reichardt was the greater song-composer—he remained in contact with Reichardt’s widow—and he seems to have valued him as a song-composer over Schubert.