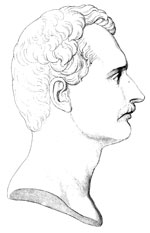 born: 1796
died: 1835
country: Germany
Karl August Georg Maximillian, Graf Platen von Hallermünde was born in Ansbach to an aristocratic Protestant family which was down on its luck; thus he never had the financial means his birth and status implied. He attended school in Munich, before departing for military service, and further study in Würzburg and Erlangen. Apart from meeting Franz von Bruchmann during this period, he encountered such luminaries as Jean Paul, J Grimm and Friedrich Rückert. Platen published his Ghaselen in 1821 (Bruchmann was given an inscribed copy) as well as Lyrische Blätter in the same year. Vermischte Schriften appeared in 1822 and Neue Ghaselen in 1823. His attempts to write plays met with no success, and he left Germany in 1826 disenchanted with his home country; in Italy he believed he would find a more tolerant ambience in which to live. Platen died in Syracuse in December 1835.

Schubert only set two of his poems, although it seems that he had intended to set two further lyrics, interestingly enough, on the theme of winter. (The Platen songs could be seen as forerunners of Winterreise.) The other major composer to interest himself in Platen’s poetry was Johannes Brahms in the songs of Opus 32.