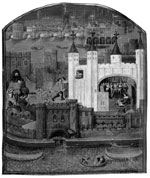 Charles d'OrlÃ©ans imprisoned in the Tower of London

born: 24 November 1394
died: 5 January 1465
country: France
Charles d’Orléans (1394–1465) was nephew of the French King Charles VI, a prince of the blood, and perhaps the best of the fifteenth-century poètes courtois. This scholar and gentleman had the great misfortune to be captured by the English at Agincourt in 1415 and spent twenty-five years in England as a prisoner of war (in various castles, including the Tower of London). He began writing verse in captivity (Livre de la prison) and continued to do so after his return to France where he made his residence at Blois a centre of literary activity. Three of his rondels were set by Debussy in 1904.