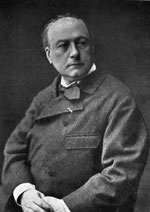 born: 14 March 1823
died: 15 March 1891
country: France
Théodore de Banville was renowned for his technical skill; he was a modern master of old poetic forms such as the triolet, ballade, villanelle, virelai and of course rondel. He was famous for his facility for rhyme. In 1873 he published ballades in the manner of Villon, and part of the Poésies of 1875 was a section entitled Rondels a la manière de Charles d’Orléans. In Banville’s volume on French versification there is a chapter on poetic license, albeit a short one. In fact it consists of one line: ‘II n’y en a pas’—‘There isn’t any.’