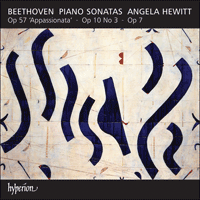 Cover artwork: Pietrasanta C02.15 by Caio Fonseca (b1959)
Reproduced by kind permission of the artist / www.caiofonseca.com

Angela Hewitt is rapidly establishing herself as one of the great pianists of our age, her concert career expanding as rapidly as her discography, so it seems only right that, following her success in tackling one of the pillars of classical music in Bach, she should tackle another in Beethoven.

This volume commences a survey of Beethoven sonatas which will couple the well known, in this case the ‘Appassionata’, with the comparatively neglected, here the grandest of Beethoven’s early sonatas, his Op 7. The disc is completed with a superb performance of Op 10/3, one of the early sonatas where Beethoven can be seen breaking the bounds of convention to create the style which would define the great works of his middle period.

All the pianistic hallmarks of Hewitt’s Bach are also to be found here—clarity, attention to detail, singing lines and, above all, a rhythmic drive which energizes and propels the music forward.

This looks like being the start of another very important series of recordings.

Cover artwork: Pietrasanta C02.15 by Caio Fonseca (b1959)
Reproduced by kind permission of the artist / www.caiofonseca.com