The LSO Percussion Ensemble comprises members of the London Symphony Orchestra’s percussion section, as well as distinguished orchestral players with enviable reputations. Its members have appeared on countless LSO recordings, including a large number of soundtracks for films such as Star Wars, Harry Potter, Braveheart, Notting Hill, and The Shape of Water. The ensemble enjoys an international following, and in 2018 embarked on their first tour of Japan. The backbone of their contribution to the LSO is approximately 70 concerts every year that the orchestra gives at its home in the Barbican Centre, as well as a similar number on tour around the world, working with such eminent conductors as Bernard Haitink, Sir Antonio Pappano, and the orchestra’s Music Director, Sir Simon Rattle (who was also a percussionist in his younger days).

The group’s first release on the LSO Live label featured music by Steve Reich, including Sextet, Clapping music and Music for pieces of wood, the last of which was licensed by AMC for use in Season 8 of The Walking Dead. The Gramophone review of the album commented that 'the LSO percussion’s performance of Sextet builds up in energy and momentum to a quite thrilling climax', and HR Audio remarked, 'The performances and the recorded sound are so outstanding … unreservedly recommended'.

The group have given concerts in London and Japan and look forward to a Far East tour of China and Taiwan in 2020, together with their debut at the Grafenegg Festival. 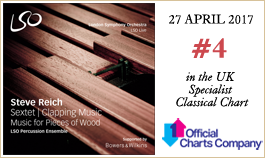