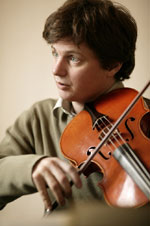 James Boyd has been a member of some of the country's foremost ensembles and is in demand as a guest artist with many others. He was a member of The Raphael Ensemble for five years and a founder member of the Vellinger String Quartet, winners of the 1994 London String Quartet competition.

In 2001 he formed The London Haydn Quartet which has become one of the most respected ensembles specialising in 'historically informed' performance of the classical repertoire. Playing with gut strings and classical bows, their passion for Haydn has led them to present many all-Haydn programmes at venues such as Wigmore Hall, the Concertgebouw, Carnegie Hall and the Library of Congress and at international festivals including Cheltenham, Esterhaza and Granada. Their recordings of the Opp 9, 17 and 20 quartets have been released on Hyperion to great acclaim.

James also plays in the Ludwig String Trio with Peter Cropper and Paul Watkins and writes occasional articles for the Strad magazine. He plays on violas by David Munro (classical) and Jan Spidlen (modern).