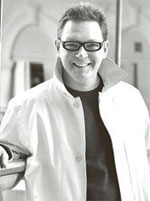 Nigel Cliffe studied at Huddersfield School of Music, Royal Academy of Music, in Zurich with Elisabeth Schwarzkopf and in Amsterdam with Margreet Honig, supported by scholarships from the Countess of Munster Trust and the Royal Society of Arts.

The composers Syvie Bodorova, Richard Chew, Peter Copley, Orlando Gough, Roxanna Panufnik and Lynne Plowman have all written works for him and his chamber music partners have included the Emperor, Heath, Martinu, Schidlof and Skâmpa quartets and the Britten Sinfonia.

As an Artistic Director he curated the Norwich Schubert Weekends, the first Waterloo Festival in 2011 and has also directed projects for the Roundhouse and Norwich Festival Voices. He gave the world premiere of Alastair Marriott’s Lieder at Sadler’s Wells with the dancers Mara Galeazzi and Gary Avis, and his teaching has taken him to Amsterdam, Lyons and Versailles.

He is a regular presenter for the Royal Opera House Insight Programme.