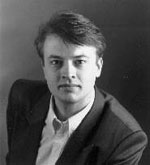 Born in Saskatchewan, Canada, Nathan Berg's vocal studies have taken him from Canada to America and Paris and finally to the Guildhall School of Music and Drama in London where he studied with Vera Rozsa. Winner of the Gold Medal for Singers at the Guildhall, he has also won prizes in the Royal Overseas League, Peter Pears, Kathleen Ferrier and Walther Gruner lieder competitions.

He has given recitals at Blackheath Concert Halls, Wigmore Hall, the Musée d'Orsay in Paris, the Harrogate International Festival, the Three Choirs Festival and in Detroit and Montréal for the Canadian Boradcasting Corporation. He has toured extensively with such conductors as Christie, Masur, Salonen, Dohnányi, Herreweghe, Tortelier, Norrington, Haenchen, Rilling, King and Leppard, singing repertoire from Bach and Handel oratorios to Mahler song cycles. Recently he has sung Schubert songs with the San Francisco Symphony Orchestra under Michael Tilson Thomas, Schubert's Mass in A flat at the BBC Proms with the BBC Symphony Orchestra under Belohlávek, and Beethoven's Ninth Symphony in Tanglewood.