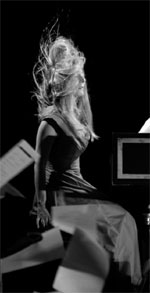 Described in The Independent on Sunday as ‘Britain’s most progressive harpsichordist’, Jane Chapman is at the forefront of creating, inspiring and discovering new music for harpsichord. She has premiered over 200 solo, chamber and electroacoustic works worldwide, and researched and recorded important musical sources from the 17th and 18th centuries on original instruments, such as the ‘Lady’s Banquet’ and the ‘Oriental Miscellany’.

Equally passionate about baroque and contemporary music, she has collaborated with ground-breaking composers, artists and dancers, working with musicians from the worlds of Indian music, jazz, and the avant-garde. She is a frequent partner in chamber ensembles, such as Trio Aporia, specialising in contemporary and baroque music on period instruments.

Her discs range from the 17th century ‘Bauyn Manuscript’ for Collins Classics, to WIRED, premiering electroacoustic works by British composers (NMC), to Berio’s ‘Rounds’ (mode), on a revival instrument with 8 pedals, awarded the Preis der Deutschen Schallplatten Kritik. As an improvisor she has recorded with electric guitarist Mark Wingfield and sax player Iain Ballamy. Jane is professor of harpsichord at the Royal College of Music, London, Turner Sims Fellow at the University of Southampton and was artist In residence at King’s College London, supported by the Leverhulme Trust. She is an Honorary Fellow of Dartington College of Arts.