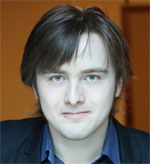 Born in Nizhniy Novgorod (Russia) in 1991, Daniil Trifonov is emerging as one of the brightest new names of the next generation of pianists, having won prizes at the Chopin Competition in Warsaw (Bronze Medal), the Rubinstein Competition in Tel Aviv (First Prize) and the Tchaikovsky Competition in Moscow (Gold Medal). Valery Gergiev personally awarded Trifonov the ‘Grand Prix’ in Moscow, an additional award given to the best overall competitor in any of that Competition’s categories.

Trifonov recently gave his debut with the London Symphony Orchestra and during the 2011/12 season he will give his first performances with the Israel Philharmonic and the Warsaw Philharmonic, as well as collaborating with Mikhail Pletnev, Vladimir Fedoseyev, Sir Neville Marriner, Pietari Inkinen and Eivind Gullberg-Jensen. He will also appear at Salle Pleyel (Paris), Carnegie Hall (New York), Suntory Hall (Tokyo), Wigmore Hall (London) and venues across Italy, France, Israel and Poland. Recent concerts have included his Japanese debut in Tokyo, recitals at the Mariinsky Concert Hall, Moscow Easter Festival, Teatro La Fenice (Italy) and the Brighton Festival (UK), and a Chopin birthday concert in Warsaw.

Daniil Trifonov has performed at many international music festivals, including Rheingau (Germany), Crescendo (Russia), Arpeggione (Austria), Musica in Villa (Italy), Dame Myra Hess Series (US), Santo Stefano (Italy), and Festival Pianistico di Trieste (Italy). His first album was released on Decca in 2011, featuring a selection of Chopin solo piano works, and he has also made a number of television recordings in Russia, the USA and Italy.