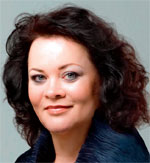 Violeta Urmana was born in Lithuania. Originally she performed as a mezzo-soprano, then as a soprano, winning world renown for her performance as Kundry in Wagner’s Parsifal and Eboli in Verdi’s Don Carlos. She has performed these roles at most of the world’s major opera houses under the direction of conductors such as Claudio Abbado, Daniel Barenboim, Bertrand de Billy, Pierre Boulez, Riccardo Chailly, James Conlon, James Levine, Fabio Luisi, Zubin Mehta, Simon Rattle, Donald Runnicles, Giuseppe Sinopoli, Christian Thielemann and Franz Welser-Möst. Following Violeta Urmana’s first appearance as Sieglinde (Die Walküre) at the Bayreuth Festival in 2001, she debuted as a soprano in the role of Iphigénie (Iphigénie en Aulide, conducted by Riccardo Muti) to open the season at La Scala, Milan in 2002. Following this, she performed her soprano repertoire to great acclaim in Vienna, Seville, Rome, London, Florence and Los Angeles, as well as at New York’s Metropolitan Opera and Vienna’s Konzerthaus.