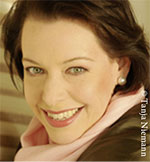 Nina Stemme’s audio and DVD recordings include Fidelio (Decca), Tristan und Isolde (EMI), final scenes of Salome and Capriccio and Four Last Songs (EMI), “Nina Stemme singt Lieder” (Phaedra), Der Rosenkavalier, Aida, and Jenufa. She has been presented with numerous awards, including Medal “Litteris et Artibus” by HM the King of Sweden, and the Laurence Olivier Award for her performance in Tristan und Isolde at the Royal Opera House, London. In 2012 she received the title Kammersängerin of the Vienna State Opera.