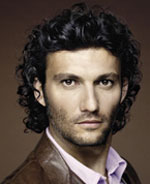 German tenor Jonas Kaufmann is internationally recognised as one of the most important artists of our day. His sensational appearances at the world’s leading opera houses have included La Rondine (opposite Angela Gheorghiu), La Traviata (opposite Anna Netrebko), and Cavaradossi (Tosca) under Antonio Pappano at the Royal Opera House, Covent Garden, London, and Lohengrin at the Bayreuth Festival. He has appeared as Alfredo in La Traviata at the Metropolitan Opera and the Lyric Opera of Chicago, as well as in new productions of the work at Opéra-Bastille, Paris, and at the Teatro Alla Scala, Milan; in Die Zauberflöte with Bavarian State Opera (Munich), Vienna State Opera, and the Metropolitan Opera; and as Faust in La Damnation de Faust at the Theâtre Royal de la Monnaie, Brussels. He has also had a close association with Zurich Opera since 2001.

Equally at home on the concert platform, Jonas Kaufmann has appeared with the world’s leading conductors and orchestras, including the Berlin Philharmonic under Sir Simon Rattle and Nikolaus Harnoncourt, the Vienna Philharmonic, and in Lucerne under Claudio Abbado. His song recitals have received high praise throughout Europe as well as in Japan. In 2008 he released his first solo album, “Romantic Arias”, for DECCA, which became an immediate international best-seller, and has since followed that with numerous audio and DVD releases for the label, including Schubert Die Schöne Müllerin, Beethoven Fidelio, and Puccini Tosca.