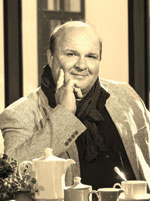 The German tenor Gerhard Siegel began his musical career as an instrumentalist and composer. After completing his voice training with Liselotte Becker-Egner at the Augsburg Conservatory, he became an ensemble member of the Stadttheater Trier. In 1995 he was the winner at the International Hans Gabor Belvedere Singing Competition in Vienna, and he was engaged in Augsburg in 1997. In 1998 he made his debut at the Bavarian State Opera in Munich. From 1999 to 2006 he was under contract at the Staatstheater Nürnberg, where he was able to expand his repertoire as a dramatic and heroic tenor. Here he sang Parsifal, Bacchus, Herodes, Florestan, Laca (Jenůfa) and Sergej (Lady Macbeth of the Mtsensk district), as well as Mephistopheles (Busoni’s Doktor Faust), Tom Rakewell and Alfredo. He won special acclaim for his debut as Stolzing (Die Meistersinger von Nürnberg) and in the title role of Siegfried.

Since 2006 Gerhard Siegel has appeared as Max in Weber’s Freischütz at the Comic Opera Berlin; in Hindemith’s Das Nusch-Nuschi and as Max in Krenek’s Jonny spielt auf in Cologne; as Florestan at the Granada Festival; as Weill’s Protagonist at the Bregenz Festival; as Herodes (Salome) at the Opéra Montpellier and at the Vienna State Opera; as Hauptmann (Wozzeck) at Teatro Real Madrid, the Opéra Bastille in Paris, Covent Garden in London, and the Metropolitan Opera in New York. A central role in his repertoire is Mime in Rheingold and Siegfried: he sang this part on his debuts at the Met in New York, at the Bayreuth Festival and at the Royal Opera House in Covent Garden.