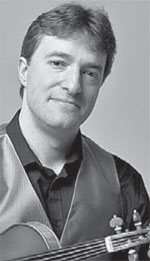 see also Adrian Chandler (conductor)
Born on Merseyside in 1974, Adrian Chandler studied both modern and Baroque violin at the Royal College of Music with Rodney Friend and Catherine Mackintosh. Whilst still a student at the RCM he founded the period ensemble La Serenissima which he has since directed in many performances in Europe and the UK.

In addition to his work with La Serenissima, Adrian Chandler has led British early music ensembles such as the Musicians of the Globe, the Gabrieli Players, the Avison Ensemble, Concerto Caledonia and the New London Consort.

As leader of Philip Pickett’s New London Consort and Musicians of the Globe, Adrian has performed on many tours in Italy, Japan, Benelux, Mexico and Austria, as well as taking part in many of the ensembles’ recordings for Decca and Philips.

In 2006 Adrian was awarded a three year AHRC (Arts and Humanities Research Council) fellowship at Southampton University in order to research the development of the North Italian violin concerto between 1690 and 1740 (running in conjunction with concerts and recordings for La Serenissima).