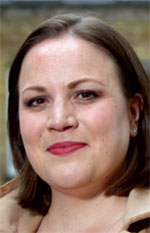 Jennifer Johnston is a BBC New Generation Artist, was named by the Financial Times (UK) as the ‘face to watch in opera’, and is the recipient of numerous awards, including Second Prize in the Montserrat Caballé International Singing Competition, two Susan Chilcott Scholarships, and a Wingate Scholarship. She has appeared in operas at the Salzburg Festival, the Edinburgh International Festival, the Festival d’Aix-en-Provence, Opéra de Lille, the Aldeburgh Festival, Scottish Opera, and Opera North, with roles including Fricka (Der Ring des Nibelungen), Suzuki (Madame Butterfly), Mrs Herring (Albert Herring), and the title roles of Dido and Aeneas, Hänsel und Gretel, Lucretia, and Agrippina.

She has appeared with many orchestras, including the BBC Symphony, Royal Philharmonic, Philharmonia, BBC National Orchestra of Wales, Hallé, English Concert, and the Akademie für Alte Musik, with conductors including Bernard Haitink, Sir John Eliot Gardiner, Jaap van Zweden, Harry Bicket, Leonard Slatkin, and Martyn Brabbins. A noted recitalist, she has appeared at Wigmore Hall (London), and at the Cheltenham, City of London, Perth, and Aldeburgh festivals, and broadcasts regularly on BBC Radio 3. Her discography includes Britten songs with Malcolm Martineau and Thuille songs with Joseph Middleton.