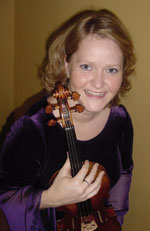 Marianne Thorsen, first prize winner at the 2003 Sion International Violin Competition (Switzerland), was born in Trondheim, a town she returned to in 2006 when she was appointed Professor at the Music Department of Norwegian University of Science and Technology. She has also for many years been a professor at the Royal Academy of Music in London. She studied with Bjarne Fiskum and finished her studies with Gyorgy Pauk at the Purcell School and the Royal Academy of Music, winning the Roth Prize and the DipRAM, the Academy's highest award for performance. She founded the Leopold String Trio in 1991 and was their leader for 15 years, taking them on extensive tours throughout the UK and abroad to concert venues like Carnegie Hall New York, Musikverein Vienna, Concertgebouw Amsterdam and the Philharmonie in Cologne. The Trio released several CDs on Hyperion, including the complete Beethoven string trios, Mozart Piano Quartets (with Paul Lewis), string trios by Dohnányi, Martinu and Schoenberg, the Schubert 'Trout' Quintet (with Paul Lewis) and the complete Brahms piano quartets with Marc-André Hamelin. In 2000 Marianne was appointed leader of The Nash Ensemble. She has performed concertos with leading orchestras including BBC Symphony, Philharmonia, City of Birmingham, Orchestre de la Suisse Romande, Bergen and Oslo Philharmonic orchestras. In 2006, 2L recorded Mozart Violin Concertos Nos 3-5 with Marianne Thorsen and the Trondheim Soloists. The CD won the Norwegian Spelleman Prize, and was nominated for a Grammy.