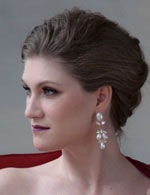 Jane Archibald began her career in her native Canada, before becoming an Adler Fellow with the San Francisco Opera. She then joined the ensemble of the Vienna State Opera, debuting many coloratura roles. She has since gone on to perform regularly in the celebrated opera houses and concert halls of the world. Her wide-ranging repertoire, from Bach to Britten, from Mozart to Messiaen, encompasses most of the standard lyric coloratura operatic roles, in addition to recent expansion into more dramatic coloratura repertoire.