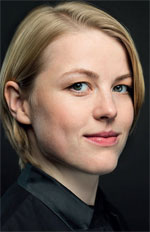 One of today’s most dynamic and nuanced young conductors, Ruth Reinhardt is building an international reputation for her musical intelligence, programmatic imagination, and elegant performances. Born in Saarbrücken, Germany, Reinhardt began studying violin at an early age and sang in the children’s chorus of Saarländisches Staatstheater, Saarbrücken’s opera company. She attended Zurich’s University of the Arts (Zürcher Hochschule der Künste) to study violin with Rudolf Koelman and conducting with Constantin Trinks, with additional training under Johannes Schlaefli. After moving to the United States, Reinhardt received her master’s degree in conducting from The Juilliard School, where she studied with Alan Gilbert.

As guest conductor, Reinhardt has appeared with the symphony orchestras of Baltimore, Cleveland, Detroit, Houston, Indianapolis, Seattle; the Frankfurt Radio Symphony, Deutsche Kammerphilharmonie Bremen, Orchestre national d’Île-de-France, Stockholm Philharmonic, Malmö Symphony, and Tonkünstler Orchestra, among others. Reinhardt was formerly the assistant conductor of the Dallas Symphony (2016-18). Prior to her appointment in Dallas, she was a Dudamel Fellow of the Los Angeles Philharmonic (2017-18), conducting fellow at the Seattle Symphony (2015-16) as well as the Boston Symphony Orchestra’s Tanglewood Music Center (2015), and an associate conducting fellow of the Taki Concordia program (2015-17).

A precocious talent, by age 17 Reinhardt had already composed and conducted an opera, for and performed by the children and youths of her hometown. While studying in Zurich, she conducted the premieres of two chamber operas for children: Die Kleine Meerjungfrau (The Little Mermaid) by Swiss composer Michal Muggli, and Wassilissa by German composer Dennis Bäsecke. Other opera productions she has conducted include Dvořák’s Rusalka and Weber’s Der Freischütz for the North Czech Opera Company, and Strauss’ Die Fledermaus at the Leipzig University of the Arts.

In November 2020, Reinhardt was named as an ambassador for the state of Saarland in Germany, an initiative established by the Saarland federal government and the SHS Foundation to further the reputation and development of Saarland through cultural and economic advancements.