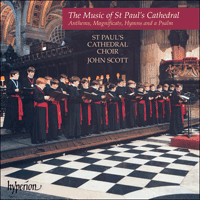 The Music of St Paul's Cathedral

'An awe-inspiring sound' (Classic FM Magazine)
'This is a worthy Millennium tribute to the musicians of St Paul’s. A disc to treasure' (Organists' Review)

The Choir of St Paul’s Cathedral
There has been a choir at St Paul’s Cathedral for over nine hundred years. The earliest records date from 1127 when the then Bishop of London, Richard de Belmeis, founded what was the first choir school and made provision for ‘almonry’ boys to serve the cathedral.

The 2nd of December 1697 saw the opening of Christopher Wren’s great cathedral following the destruction of the first (wooden) one in the Great Fire of London in 1666. John Blow, then Master of the Choristers, wrote his anthem ‘I was glad when they said unto me’ to be sung at this grand occasion. He was assisted by his pupil Jeremiah Clarke, who was to become the first official Organist of the new cathedral.

The choir today consists of thirty choristers (boy trebles), eight probationers (who will become choristers), six countertenors (altos), six tenors and six basses. The choristers are selected by audition and, once chosen, find themselves in a world which demands much of them, but which has its own special rewards. There are two rehearsals every day to prepare the daily service music and for many other special services and concerts. Within this framework the boys also carry out their normal school activities, both academic and sporting, as well as studying piano and one other instrument. The training and discipline necessary to sing as a chorister in this enriching environment gives them a wonderful musical and general educational start in life. Indeed many of them gain valuable scholarships to their next schools. The Vicars Choral are all professional singers who come from a wide range of backgrounds; some from music colleges, other cathedrals, or the Oxbridge chapel choirs. They combine their work at St Paul’s with freelance musical activities and working with other choirs and ensembles.

In recent years the choir has established itself as one of the major forces in British church music. The size of the choir and its mature, professional tone, set it apart from any other comparable group of singers. At the heart of the choir’s being is the monastic tradition of singing services in the cathedral. Evensong is sung every day, and on Sundays there are three choral services—Mattins, Eucharist and Evensong. As well as carrying out its regular duties in the cathedral the choir frequently gives concerts and broadcasts and has many notable recordings to its credit. Through these recordings and overseas tours the Choir of St Paul’s has reached thousands of people with music-making of the highest quality.

The present Organist and Director of Music, John Scott, has held the post since 1990. His duties involve the planning and direction of the musical life of the Cathedral, training and conducting the choir and choosing music for services. He is assisted in this work by the Sub-Organist (currently Huw Williams) and by the Assistant Sub-Organist (Richard Moorhouse). They follow an illustrious line of musicians who have held posts at St Paul’s, among them Thomas Morley, Jeremiah Clarke, Maurice Greene, Thomas Attwood, Sir John Goss, Sir John Stainer, Sir George Martin, Dr Charles Macpherson, Sir John Dykes Bower and Christopher Dearnley.

In addition to the music for services, the Music Department runs a year-long programme of concerts and organ recitals. These include a series of six celebrity organ recitals on the first Thursday of every month from May to October, a regular Sunday evening organ recital, informal lunchtime concerts (on weekdays) given by unaccompanied choirs, and performances (with orchestra) of Handel’s Messiah in Advent and a Bach Passion in Holy Week.

The music on this album is taken from the many recordings in the Hyperion catalogue—with one exception. There’s a wideness in God’s mercy (track 10) was specially recorded. The tune, Corvedale, is by Maurice Bevan who sang bass in the St Paul’s Choir for many years.