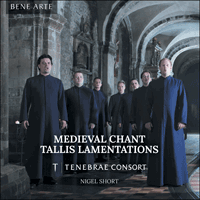 The Tenebrae Consort is an outstanding group of musicians, with singers hand-picked from the award winning chamber choir Tenebrae. Known for their instinctive ensemble skills, the singers and instrumentalists are directed from within the Consort by Nigel Short who leads the group to attain music making of the highest quality. Focusing on the repertoire originally written for consort performance, particularly early music, the Tenebrae Consort aims to shed new interpretative light on works through the combination of both passion and precision, creating an intimate and unique concert experience. On this recording they explore classic works at the very heart of the Medieval and early-Renaissance British Choral Tradition.

'This is a CD which covers all cases, and the informative notes by John Rowlands-Pritchard will satisfy the needs of the most demanding EMR reader, and the singing on [it] is very lovely indeed' (Early Music Review)» More

Chant for Passiontide from the Salisbury Cathedral tradition

Compline
Compline marks the completion of the day’s work in a monastic context. In some communities it was even recited at the bedside in the dormitory. St. Benedict in his ‘Rule’ stipulates three Psalms recited straight through without antiphons; then the hymn which is appropriate for the ‘Hour’, the lesson, the versicle, Kyrie eleison, the blessing and the Collect. Unlike the other six daytime services, Benedict’s Compline is invariable, and is recited throughout the year in the same way. The choice of texts by Benedict speak of the night, and of a desire to be protected both physically and spiritually whilst asleep, and thus off-guard.

Psalms
The core of monastic prayer is the recitation of the psalter “taking care that the whole Psalter of a hundred and fifty Psalms be recited every week, and always begun afresh at the Night Office on Sunday. For those monks would shew themselves very slothful in the divine service who said in the course of a week less than the entire Psalter, with the usual canticles; since we read that our Holy Fathers resolutely performed in a single day what I pray we tepid monks may achieve in a whole week” (Benedict: Rule, Chapter 18).

In peace—in that same—I will sleep, and I will rest:
For you, Lord, alone have established me in hope.

This text is familiar as In pace in idipsum, set in polyphony as a Compline respond for Lent by the Tudor composers Tallis, Sheppard and Taverner.

Qui habitat in adjutorio Altissimi (Psalm 90 - Latin, 91- English) is one of protection from physical and spiritual assault. “God will cover you with his wings, you will not fear night terrors, or assault by day. It is God himself who is your refuge, and his angels will take you in their hands and guard you.” This is the source text for the liturgical texts for the first Sunday in Lent, and is quoted by Christ in the context of his long meditation in the desert.

The final of Benedict’s three compline psalms is Ecce nunc benedicite Dominum (Psalm 133 - Latin, 134 - English). This is one of the short and delightful group of fifteen Songs of Degrees, or Ascent. The performers lift up their hands at night in the Temple, praising God.

Other Complines
In other traditions, both in monastic and mendicant orders, in the Roman version, and in collegiate and cathedral communities, the shape of Compline was generally expanded in various ways. There were, and are, many various Complines, almost as many differing forms as there are houses where it is part of the diurnal round. For example the hymn may be changed to mark a feast day, or to be seasonally appropriate. In most places there was an introductory reading, and extra prayers. The psalms were frequently elaborated with an antiphon; and the canticle Nunc dimittis was part of many Complines.

The present recording represents that used at Salisbury Cathedral in the centuries before the Reformation. Salisbury was renowned across Europe as a centre of ritual excellence, both in various embellishments to the basic Roman liturgy, and in the care of its observation and performance. In addition to the basic Benedictine items, Compline at Salisbury in common with other traditions adds the first six verses of the Psalm In te Domine speravi (Psalm 30, Latin, 31 English). God is invoked as a carer, and as protector. The extract concludes with the verse:

Into your hands I commend my spirit: you have redeemed me, O Lord God of truth.

This is the verse spoken by Christ from the cross, and therefore of huge resonance, although equally appropriate to preparing for sleep. Moreover in the Salisbury tradition it is the text for the choral response to the short reading at Compline for Passiontide, and as such features on this recording twice: firstly in its original chant form during the service itself, and secondly in its setting by John Sheppard, the first of three such settings he composed.

Tudor polyphonic settings for Compline
As well as Sheppard, both Thomas Tallis and John Taverner made polyphonic settings for performance during elaborated recitations of compline during the Tudor years. They are invariably wedded to the chant from which they derive, and the liturgical structure of solo cantor and choral response is marked by alternation of chant with polyphony. In addition to the composers already mentioned, William Byrd, Robert Whyte, and John Mason composed polyphonic alternatim versions of Compline texts, mostly for use during Passiontide. The short reign of Mary and the revival of the pre-Henrician liturgy at court provided the context for many of these compositions.

Mason’s setting of the Nunc dimittis antiphon O rex gloriose lasts approaching twelve minutes, and Sheppard’s setting of Media vita lasts more than twenty minutes, giving an idea of the elaboration of the small-scale service of Compline in a Tudor ceremonial context.

Thomas Tallis Lamentations, with two chant versions of Responds for Holy Week
Tallis composed the two settings of Lamentations for texts which accurately duplicate the first two lessons (of nine) for the Night Office on Maundy Thursday. It is confidently believed that these settings by Tallis were for private performance as devotional music, and not as liturgical pieces for use in church. Nonetheless, what would have been the appropriate choral Responds to these two lessons are performed here, as examples of the music used daily and nightly in cathedrals and abbeys for centuries. A Respond is a musically elaborate piece, though as usual in Gregorian chant it is the text which is important, and it is the degree of elaboration of the music which gives it a delivery appropriate to its liturgical position within the service. The two examples performed are part of the first of three Tenebrae services recited in the three nights of Holy Week before Easter Night—that is to say Maundy Thursday, Good Friday, and Holy Saturday. The texts are the words of Christ during the events in the garden of Gethsemene, and are liturgically a response to the old testament readings, the lament of Jeremiah the prophet.

Hymn for Passiontide: Pange lingua gloriosi
The words of the hymn are by Venantius Fortunatus, the sixth century Italian poet, who became the confidant of St. Radegund, and Bishop of Poitiers. The first four verses of Pange lingua are part of the Passiontide liturgy, as the hymn on Passion Sunday itself for the Night Office. Fortunatus also composed Vexilla regis prodeunt, the hymn at Vespers the previous evening. Pange lingua in full forms part of the Good Friday liturgy, when it is sung to a different melody, with the verse Crux fidelis repeated in full after each stanza.

Litany after Lauds for Maundy Thursday
Early on Maundy Thursday, at the dawn office of Lauds, the beginning of the three days was marked by a simple and moving ceremony. The accustomed prayers were replaced with a short litany incorporating the verse from St Paul’s letter to the Philippians: “Christ the Lord became obedient, even to the point of death”. The sentence is placed amid repetitions of the Greek “Kyrie eleison, Christe eleison”, and with added verses in which Christ is addressed directly. It ends with a single voice, that of a chorister boy, completing the phrase; ‘even the death of the cross’.

The timeless beauty of the simple melodic and rhythmic inflections of chant captivated me even as a young chorister, and singing it during Lent or Advent always represented something of a treat. Its calming, reflective and almost hypnotic effect is particularly powerful heard within the context of our highly-charged lives, yet it has been sung by monks for around a thousand years in churches, cathedrals and abbeys throughout the world.

During the Renaissance period, composers used certain melodies as a linchpin for their settings of the Mass, a single line repeated through each movement (cantus firmus) while several other vocal strands are wrapped around it, resulting in a wonderful polyphonic texture. More recently, composers have also used chant as the basis for their choral works, building more and more elaborate harmonies around the melodies including Maurice Duruflé in his atmospheric setting of the Requiem and Quatre motets sur des thèmes grégoriens.

We draw our music for this recording from the Salisbury Cathedral tradition—renowned for its ritual excellence, observation and performance—in the centuries before the Reformation. This recording of Compline sung during Holy Week is enhanced with Tallis’ Lamentations—some of the most poignant and intense polyphonic settings of sacred texts used in Passiontide. These settings for five lower voices prove not only the depth of Tallis’ devotion to the ‘old faith’ and the Catholic rites but also his mastery of the polyphonic art, and cements his rightful place as one of the greatest composers of the English Renaissance.

Much of the chant sung on this recording is heard in Tenebrae’s concerts as the choir (or groups from within the choir) moves around a venue, often singing by candlelight, embracing the different effects on the senses to enhance the aural, visual and spiritual experience. We hope that this music brings you a moment of calm and beauty.