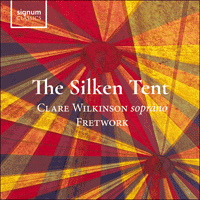 From Byrd and Gibbons through to Nyman and Goehr, this album puts to bed the idea that the viol is a spent force, the instruments' beguiling lines sinuously interweaving with soprano voice—and taking in some arresting arrangements.

Until quite recently it was thought that the viola da gamba died with the death of one its most loved exponents, Charles Frederick Abel, in 1787; and that it was literally buried with the composer in St Pancras Old Church, near Kings Cross Station in north London. Then, so we thought, it was forgotten until Arnold Dolmetsch pioneered a revival at the end of the nineteenth century.

Not so. In fact, we now know that there has always been someone playing the viol, all through the nineteenth century, and that what Dolmetsch revived was the idea of the viol consort and an interest in the music written for the instrument.

So the viol family, developed from a common ancestor of the guitar, the vihuela around the end of the fifteenth century in Spain, has a continuous history from then until the present day, in a similar way to the violin family, which was born around the same time.

Our programme here seeks to reflect that extended history and bring music written specifically for viols, from whatever century, alongside that which has been arranged for them.

The evidence we have of viol playing in the nineteenth century suggests that the instrument was seen as an antique curiosity in itself, but that there was little interest in the music written for it. Thus we have an Abendlied by Schumann arranged (or merely written out) for viol and piano. In fact, a viol consort can be an excellent vehicle for romantic music, provided the music is chosen with care. A good example here is the short piece by Edvard Grieg called Heimweh (homesickness) which is drawn from one of his Lyric Pieces (Book 6, Op 57 No 6). The original has a central section in E major which is quite unsuited to viols; but this opening (and closing) section is intense, deeply melancholy and contained, which suits viols down to the ground.

At either end of the time spectrum, there is music written specifically for viols. For example we can take the little consort song by Byrd Where the blind and wanton boy, with a text reconstructed by Philip Brett. Byrd published many consort songs for voice and viols, and could be said to have invented the form. But he also re-arranged them for an entirely vocal ensemble, and the easy convertibility between vocal and instrumental performance was characteristic of the age. Turn our captivity, O Lord was published by Byrd in his ‘Psalms, Sonnets & Songs’ in 1611, fully texted; and it is normally performed with an a cappella vocal ensemble. But it is equally valid as a consort song, with the top line sung and the rest played on viols.

A year later Orlando Gibbons published his ‘First set of Madrigals and motets of 5 parts’ where we find Now each flowery bank of May. The title rubric goes on to say that the music is ‘apt for Viols and Voyces’—note that ‘Viols’ come first.

Henry Purcell was one of the greatest composers of English song. For the most part these were originally conceived with a simple bass line accompaniment for a harpsichord, theorbo and bass viol. A chordal accompaniment is usually improvised by the player on the spot and this provides great flexibility of rhythm and texture; but it’s very useful for Fretwork to be able to include some of these songs in its programmes, and so some years ago I started to realise the harmonies implied, and sometimes explicit, in the bass line for several viols. Music for a while is a song written in 1692 for the play by Dryden & Lee called Oedipus.

In 2000, Fretwork commissioned Alexander Goehr to write a work for voice and viol consort, and Sandy came up with a highly imaginative basket of pieces which he said could be performed in any order, either together or alone. Three Sonnets & Two Fantasias itself both harks back to the ‘golden age’ of consort music in its choice of texts—two Shakespeare sonnets—and references the contemporary world in choosing another sonnet by the American poet, Robert Frost; the very poem that gives title to this recording. Goehr uses the viols with the same delicacy and subtlety that we find in Byrd and Gibbons, but within an entirely different harmonic world.

Clare Wilkinson is the daughter of the distinguished composer and choral director, Stephen Wilkinson, and he has arranged two of his songs, originally accompanied by piano, for viols. The garden is a setting of a wonderfully evocative Robert Herrick poem, extolling the virtues and pleasure of solitude and innocence. Which, of course, leads to the solitude experienced by Katherine Phillips, poet and translator of the French poem by Saint-Amant. She was a significant literary figure until her death just after the Restoration of the monarchy in 1660. Purcell’s setting is masterly, taking his favourite device, the ground bass, and weaving a melodic line of extraordinary plasticity and variety over this unchanging bass.

Wilkinson’s other song is a setting of WH Auden, a poem spoken from the point of view of the young virgin Mary addressing the infant Christ, thoughts shaded by a premonition of the fate awaiting the mature Jesus. And exactly the same thought animates the poem by Eduard Mörike set by Hugo Wolf in 1888—the young Christ plays upon his mother’s lap, but there in the background, the tree that will make the cross is already growing.

Sometimes arranging pieces for viols presents itself without problems. One such was O waly, waly by Benjamin Britten. The low voice version of this reaches down exactly to the lowest note of the 7-string bass viol, and at the same time, it reaches up too the highest reasonable note on the treble viol. And the same could be said of Shostakovitch’s Prelude & Fugue in C major, arranged by my colleague Richard Campbell. The fugue, which uses only the white notes of the piano keyboard, is contained perfectly within the compass of the viols.

Debussy’s limpidly beautiful La fille aux cheveux de lin, from his first book of Preludes, composed in 1910, was inspired by a poem of the same name by Leconte de Lisle from his Chansons écossaises. The girl in question is Scottish, hence the blond hair.

Philip Heseltine was the real name of Peter Warlock, and he had a passionate interest in Elizabethan and Jacobean music. He made the first transcription of Dowland’s Lachrimae collection, for example; and this led him on to an appreciation of the poetry of the time. His setting of Sleep by John Fletcher, of Beaumont & Fletcher fame, is masterly, and betrays his lifelong love of the music of Delius, and of extreme chromaticism.

Michael Nyman also studied Elizabethan music, under Thurston Dart at Kings College, London during the 1960s, and his breakthrough work was a reimagining of Purcell as the soundtrack for Peter Greenaway’s ‘The Draughtsman’s Contract’: Chasing sheep is best left to shepherds. His song If, however, is taken from the music for a Japanese animated film about the life of Anne Frank to a text by Roger Pulvers. The open-handed simplicity of the music reflects the innocent questioning of the young Frank.