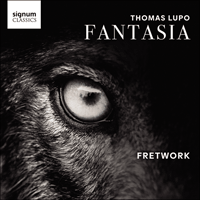 Thomas Lupo was still a teenager when he joined the court violin consort in 1588, serving the young Prince Henry (son of James I) and then his brother Charles (the future Charles I and one of England's most discerning patrons of music). He remained in post till his death in 1627. His copious and varied works for viols encapsulate the golden years of Jacobean England.

While we may be familiar with those great Continental musical dynasties, the Bachs, the Couperins and the Scarlattis, an English one still eludes us.

Perhaps a candidate might be the Lupo family: they come into view as a family of immigrants, brought from Venice to London by Henry VIII to liven up his court music. In 1539 Henry was in a frisky mood, and music was very much on his mind, as he looked for a new queen:

The King, who in some former years has been solitary and pensive, now gives himself up to amusement, going to play every night upon the Thames, with harps, chanters and all kinds of music and pastime. He evidently delights now in painting and embroidery, having sent men to France, Flanders, Italy and elsewhere for masters of this art, and also for musicians and other ministers of pastime. All his people think this is a sign of his desire to marry, if he should find an agreeable match.

His man in Venice was Edmond Harvel, who first found the Bassano family, principally wind players, which he dispatched to London in 1539; then, the following year, a group of six string players: 'Alberto da Venitia, Vincenzo da Venitia, Alexandro da Mylano, Zua Maria da Cermona, Ambrose da Milano, and Romano da Milano pleyers on the Vialles'. They were Sephardic Jews, probably originally from Portugal, thrown out in 1492, and who had settled briefly in Milan and Venice, before being brought to London. They stayed and thrived and by the end of the century had so integrated into English life, that they had their own coat of arms.

Their situation was precarious. While Jews had been given royal protection under the reigns of Henry I, and they had proved useful in providing credit for medieval kings, they were eventually persecuted and exiled in 1290. It was not until Oliver Cromwell opened the door to them in 1653 that they were officially allowed to return. However, a clandestine community of Jews clearly existed in London in the 16th century; and Henry, who must have known their true religion, seemed to turn a blind eye, probably happy with their musical expertise. The six who came were players both of viol and violin families, and they brought the Italian style of dance and contrapuntal music with them, which became the basis for the great flourishing of English viol consort music that filled the halls of country houses for a century and more.

The name itself is also a clue to their Jewish origins: it means wolf in Italian, just as Lopez does in Spanish. It may have been a derogatory term given to Jews by the Christian population and either ironically or resignedly taken up by the Jews themselves. But when they arrived in England, they didn’t call themselves Lupo, merely their first name plus where they came from. Thus we find Ambrosio de Milano was the patriarch of the family. Yet his Jewish name was revealed in a probate document of 1542, where he is described as ‘Ambrosius deomaleyex’, a garbled version of ‘de Almaliach’, a Sephardic name more commonly rendered ‘de Elmaleh’.

He had (at least) two sons, Peter and Joseph. From Peter nothing has survived, but from Joseph a rather beautiful five-part pavan, based on Lassus’s Susanne un jour has come down to us. He served in the court until his death in 1616, and played at Queen Elizabeth’s funeral. His son is the subject of this recording and the most prolific and significant composer of the dynasty.

Thomas was only 16 when he joined the court violin consort in 1588, but he stayed there until his death, when he was succeeded by his son, Theophilus. He was notably in the young Prince Henry’s musical establishment, along with Ferrabosco, Coprario and Gibbons, and then, after Henry’s death in 1612, with his brother Charles’s establishment.

Playford later in the century wrote that the young Charles could ‘play his part exactly well on the Bass-Viol, especially of those incomparable Fancies of Mr Coperario to the Organ’, and it seems that the majority of Lupo’s consort music was written for Charles’s household musical establishment, which means that the young Prince could have played these pieces, alongside Coprario, Gibbons & Ferrabosco. One can only imagine how such an illustrious ensemble would have sounded.

But Lupo in some ways led a double life, as both viol player and violinist. For in 1621 he was given 40 marks a year as ‘composer for our Violins, that they might be the better furnished with variety and choise for our delight and pleasure in that kind’. It seems he was to write music for a nascent ensemble involving some thirteen string players in what can be described as the world’s first orchestra. However, almost none of the music that they played has survived, or not in a form that allows for easy reconstruction.

Fortunately, however, a very large quantity of his more private and intimate viol consort music has survived, and we can marvel at its variety and quality. Lupo writes for unique combinations of viols in his three-part Fantasies: in addition to the usual treble, tenor & bass, and two trebles & bass format, we find 3 basses, 3 trebles, 2 trebles & tenor, treble & 2 tenors, 2 tenors & bass. This variety of textures is mirrored in the variety of moods and musical devices, and the parallel to some of the three-part music by his friend and colleague Orlando Gibbons is sometimes quite obvious.

All this music, along with almost all viol consort music survives in manuscripts copied one from another among groups of viol-playing enthusiasts. Gibbons’s collection of three-part Fantasies was unusual in that it was printed, and handsomely: ‘Cut in Copper, the like not heretofore extant’.

The five- and six-part fantasies are his most impressive work, some rising to the exalted standard of Gibbons. They are serious and compelling pieces, showing a fabulous command of counterpoint. They also hark back to the Lupos Italian roots, with references to the madrigals of Marenzio and Vecchi; but this was common amongst this select group of composers at court, where all things Italian were in fashion. Giovanni Coprario started his life as plain old John Cooper, but changed his name; and wrote many fantasies with Italian titles.

One thing that is striking about Lupo’s oeuvre is the lack of any surviving In Nomines, something that almost all English composers had a go at; and in the small number of sacred works, he set no New Testament texts. All of which suggests that Thomas Lupo was fully aware of his Jewish origins—after all, he was already 20 years old when his grandfather died, and one can imagine that such a family, already displaced twice, might be a close-knit one.

Thomas Lupo had a secure position at the royal court for his entire life, and was considered one of the finest composers of his time. As such, he was paid well; yet by the end of his life, he was severely in debt, and only a few months before he died in December 1627, he was forced to sign away more than £100 of future income to a creditor, but ‘before he could subscribe, his wife by violence kept him off and would not permit him’.