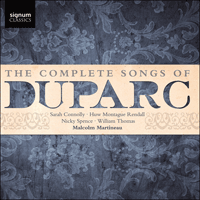 Henri Duparc was born on 21 January 1848 in Paris to a wealthy family of the lower nobility. His father was an engineer and, at the age of 40, had already been made a Chevalier of the Legion of Honour for his services to the state, which included a term as Inspector General of Roads and Bridges. The full family name was Fouques Duparc and the name Fouques can be traced back to the 11th century, when a family member came over to England with William the Conqueror. More recently, in 1767, a François Fouques Duparc entered the royal court at Versailles.

By the time of Henri’s birth, the family had been settled in Paris for five or six generations. His mother Amélie, though described on his birth certificate as ‘sans profession’, wrote a number of books of religious instruction and was a frequent visitor to prisons where she taught the catechism to the inmates. Henri studied under the Jesuits at the Collège de Vaugirard, and here he had the good fortune to find César Franck as his piano teacher. But already there were signs of the nervous disorder that was later to strike in a more acute form: he suffered serious headaches and went through a period of sleepwalking. He also needed a lot of sleep, so that he can’t have been helped by the Jesuits starting the day at 5am.

To Franck he owed his earliest musical experiences through the music of Bach, Gluck, Beethoven, Schubert and Schumann, but for the moment he did not study composition with his teacher. But in 1864 he began a little set of Six rêveries, which suggest also a knowledge of Mendelssohn’s Songs without words. Three years later, on leaving the Collège, he started to study law, but at the same time began composition lessons with Franck. His parents were not opposed to his becoming a composer, but stipulated ‘that he should not write music like just anybody’. Franck, for his part, was always insisting to his pupils that they must ‘write little but make it extremely good’. This weight of expectation, together with the need to uphold the family name and the lessons of work and duty learnt from the Jesuits, was undoubtedly a great deal to carry for a young man.

The first of the 16 solo songs that survive, Chanson triste, dates from 1868 or 1869. Then the latter year saw a flood of composition, such as he would never achieve again, comprising Soupir, Romance de Mignon, Sérénade, Le galop and possibly also Au pays où se fait la guerre. The first four of these, with Chanson triste, were published that year as his Cinq mélodies, Op 2. If the spirit of Gounod lives on in these, nonetheless there are early indications of Duparc’s individuality. In Chanson triste, he seems deliberately to accent unimportant words (‘dans’, ‘un’, ‘et’) in a way that Gounod would never do, nor Debussy for that matter. He also, in the opening four-bar phrase, does his best to undermine any feeling of regularity in the vocal line. Soupir already shows the influence of Franckian harmony, highly suitable to a song of lost love that Duparc related to his unduly protracted wooing of his future wife. In Romance de Mignon, he combines such harmony with the traditional lyricism of mid-19th-century French opera—Thomas’s opera Mignon may have been a starting point. Sérénade too follows a traditional path for such titles, with a few Fauréan modal inflections, but in Le galop Duparc for the first time gets away from the theme of love in a clear imitation of The Erl-King, though happily the piano writing is more grateful than Schubert’s. Of these five songs, Duparc retained only Chanson triste and Soupir, both considerably revised, for his ‘definitive’ edition of 1911.

The years 1869 and 1870 were crucial for his musical development, not only because of Franck’s lessons, but also through Duparc’s visits to Munich to hear Tristan, Das Rheingold and Die Walküre, the last of which he was taken to see by Saint-Saëns. Au pays, arguably the first of the great Duparc songs, has an undeniably Wagnerian sweep, with larger intervals in the melodic line than those favoured by Gounod or Fauré, and was taken from an unfinished opera Roussalka. The invasion of France by Prussia in the autumn of 1870 brought Duparc and his rifle to the defence of Paris and his next three songs were written while he was doing his patriotic duty. In L’invitation au voyage, one of the earliest Baudelaire settings by anyone, the piano continues to develop its own identity on the lines of the Wagnerian orchestra, here prolonging the ecstasy of the vocal line in a magical, magisterial coda. In the first edition of 1894, Duparc dedicated this passionate song to his wife, whom he had finally married in November 1871.

La vague et la cloche and La fuite probably date from the end of January 1871. The first of these is the only song Duparc wrote originally with orchestral accompaniment. He asked Vincent d’Indy to provide a piano reduction, but the result is very hard to play and Duparc made his own very shortly afterwards, which is the one currently in print. (It is worth saying that, while he was by his own admission no keyboard virtuoso, his piano parts are decidedly grateful. For years, pianists accompanying mezzo-sopranos in a low A minor version of L’invitation had to struggle with awkward chords and figurations, foisted on them by Duparc’s publisher who thought that the five flats of his original B flat minor might intimidate young lady pianists, whereas in that key the difficulties in fact pretty much disappear.)

After the Franco-Prussian War and the Commune, Duparc followed the tenets of the newly-formed Société Nationale de Musique and briefly turned his attention to orchestral music, of which the symphonic poems Lénore and Aux étoiles survive. Then in 1874 he returned to song writing with Élégie, a setting of a translation by his wife of Thomas Moore’s ‘Elegy on the death of Robert Emmet’, which must rank among the most heart-rending laments ever written. Two songs written around the end of the decade, Extase and Le manoir de Rosemonde, demonstrate two complementary facets of Duparc’s art. The first embraces a single ecstatic mood in deliberate imitation of Tristan, Duparc being annoyed by the way critics were unthinkingly using ‘Wagnerism’ as a standard form of abuse; the second is a commentary on unrequited love that combines a powerful narrative flow with bitter individual harmonies.

Finally, between 1880 and 1884, Duparc wrote what might be called his ‘four last songs’. Of Sérénade florentine, the shortest of all his songs, he wrote that he was fond of it ‘because it gets away from the sad or violent atmosphere of the others’. It cannot be said that Phidylé is either of these things, returning as it does to the dreamlike atmosphere of Invitation au voyage. It has been suggested that Phidylé was composed in imitation of Fauré’s Lydia—but if so, as Fritz Noske says, ‘it constitutes an obvious proof of the two masters’ spiritual diversity’, Duparc’s song being ‘characterised by a veiled tenderness, even a melancholy, that strongly contrasts with the simple clarity of the earlier work’. An attested link between the two composers is found in Duparc’s dedication of the autograph of the powerfully tragic Lamento ‘à mon maître et ami G. Fauré’, where Fauré has written over ‘maître’ the word ‘élève’. Nowhere in Duparc's oeuvre is so much feeling invested in so few chords.

Testament also shows how Duparc can make much of a little, the music being dominated by the three falling notes of the opening. In this song the piano reaches its apogee, being at least an equal partner with the voice, and concluding with a coda that brings no consolation. With his second Baudelaire setting, La vie antérieure, Duparc again proves himself worthy of one of the 19th century’s greatest poets. From the hieratic solemnity of the opening, through the roaring of the waves, to the blinding vision of ‘C’est là que j’ai vécu’ ('it is there that I have lived') and on to the astonishing harmonies of the two last pages, it is quite simply an unparalleled masterpiece, and certainly not a song that could have been composed by ‘just anybody’.

Reynaldo Hahn complained of Duparc’s word setting; Ravel thought his songs were ‘imperfect … but works of genius’; Debussy, under the name of M. Croche, disagreed, explaining that he couldn’t say anything about them ‘because they’re perfect’. History has dismissed Hahn’s reservations. When Duparc stopped writing due to some nervous disorder (brought on by a surfeit of expectation?) in 1885, at the age of only 37, a vital stream of strength and intensity was lost to French song writing. He lived for another 48 years, orchestrating and tinkering with his songs, but publishing nothing new. We must be grateful, though, for what we have. As Noske says, ‘his genius inaugurates the epoch when the mélodie becomes the preferred medium for the greatest French composers, who confide to it their most intimate and most profound inspirations.’