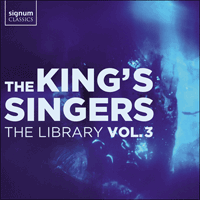 The King's Singers – The Library, Vol. 3

A third volume in the series exploring both the history, and the new horizons, of The King’s Singers’ close-harmony repertoire.

This is the third volume in our EP series The Library. The idea behind this series is to explore, maintain and develop our library of close-harmony repertoire. Close-harmony is arguably the part of our work for which we are best known, and our library of thousands of arrangements is one we’re determined always to nurture. The track-listing of each volume in this series is designed to celebrate old favourites from this library alongside brand new arrangements, created especially for these recordings, which may perhaps become ‘old favourites’ of the future. The Library, Vol 3 was recorded during a brief lift in UK pandemic restrictions, and provided a wonderful focus for us as we came back together after lockdown to rehearse and record it over two sunny days at the Yehudi Menuhin School in the south of England.

It has become something of a theme through these Library releases to include a song by The Beatles; our version of Honey pie (from The White Album, 1968) has been making audiences giggle for decades. It was on The King’s Singers’ 1986 album, The Beatles Connection, which was co-produced by The Beatles’ own George Martin. It hasn’t been recorded since then, but has become a regular crowd-pleaser, with Paul Hart’s masterful arrangement giving plenty of scope for signature on-stage silliness. The song is sung in the voice of a boyfriend who is feeling abandoned in the north of England, while his girlfriend is busy becoming a movie star in Hollywood. The original song, and the arrangement, are coloured with some of the music hall and ragtime sounds that conjure images of glamorous streets in 1960s California. And even Louis Armstrong himself makes a brief appearance towards the end of the arrangement. Or is that Johnny …?

Anybody who undertakes a ritual annual viewing of Love Actually will recognise Songbird, the song which accompanies a beautiful but rather sad love scene between Sarah and Karl halfway through the film. Fans of Eva Cassidy will recognise it as her cover version, but the song was originally by Fleetwood Mac, from their 1977 hit album Rumours. The song was written by Christine McVie, their vocalist and keyboard player, whose brother, it so happens, auditioned for the role of bass in The King’s Singers in 2010. McVie’s song captures the sheer joy of feeling a love for someone which is unconditional, hopeful and ever-growing. Nick’s arrangement, written especially for this recording, captures the simplicity and honesty of that original Fleetwood Mac performance.

It can sometimes be difficult to find songs which are ripe for arranging. We need songs which won’t sound awkward when translated to voices alone, and which will stand the test of time many years hence. Paul Simon is a songwriter whose work is almost invariably ripe, and Fifty ways to leave your lover is no exception. It was No 1 in the US Charts when it came out in 1975, and has never lost its colour since. Our arrangement, by Andrew Pryce Jackman was recorded by The King’s Singers in 1993 on the studio album Good Vibrations, but hasn’t been recorded since, and never with the live, acoustic sound of our The Library releases.

Having bubbled away for several years on YouTube as a young, cult idol for a cappella nerds around the world, Jacob Collier came fully to the boil in 2016 when he released his debut album, In my room, on Quincy Jones’ record label. The album won him two Grammy awards, and set him up as a musical sensation, known for his infectious love of music theory and technology, as well as his songwriting, playing and singing. A track which stood out to us from this album was In the real early morning. In a landscape of eccentric harmony and musical boundary-pushing on the album, this song highlighted a pure and timeless quality in Jacob’s songwriting. With Jacob’s blessing, Pat created an arrangement for the group, which we now look forward to singing for live audiences around the world.

Over recent years, we have been enjoying increasingly frequent tours to the People’s Republic of China. It is remarkable to tour the country, seeing the great sprawl of its cities, the vast fields of its countryside, the extraordinary preponderance of technology in daily life, as well as the pride that its people feel in their musical traditions. One song in particular has been part of Chinese culture for centuries, and never fails to raise a smile for our audiences there. The folk song Mo li hua (Jasmine flower) dates back to the early days of the Qing Dynasty, in the 18th century and has remained in public consciousness to the present day. We are taking this chance to celebrate this beautiful song—in an arrangement by Philip Lawson—not just in China, but for our audience globally.

Quite what Nikolay Rimsky-Korsakov (1844-1908) would make of our 'Flight of the bumblebee' (originally from his opera The Tale of Tsar Saltan) we are not sure; it’s possibly best that no one will ever know. But his iconic depiction of this charming insect has captured the imagination of many musicians through the centuries, from Sergei Rachmaninov right through to the German a cappella group The Comedian Harmonists, whose rendition formed the basis for ours (arranged by Daryl Runswick). There is something we can say with some confidence, however: rarely is so much rehearsal, concentration and energy required in order to make 90 seconds of music!