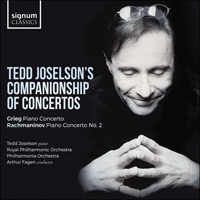 Edvard Grieg Piano Concerto in A minor Op 16
A man of leonine visage but frail, small physique plagued by poor health (not yet 17 he contacted pleurisy and tuberculosis in early 1860, losing his left lung), Grieg was born in Bergen, his Scottish great-grandfather, Alexander Greig, having arrived in Norway around 1770, some years after the Battle of Culloden. In 1858, on the advice of the Norwegian Romantic nationalist Ole Bull, he went to the Leipzig Conservatory, graduating in 1862. Here he studied piano with the director, Ignaz Moscheles, and, during his last year, composition with Reinecke, the latter, however, incurring his dissent. ‘I must admit,’ he told his first biographer, Aimar Grønvold, ‘that I left Leipzig Conservatory just as stupid as I entered it. Naturally, I did learn something there, but my individuality was still a closed book to me.’ Embarking on a career as pianist and conductor, he married his cousin, the lyric soprano Nina Hagerup, in June 1867. They had a daughter, Alexandra, who died from meningitis shortly after her first birthday.

Written at the instrument, the A minor Concerto, orchestrated in Christiana (Oslo) during the winter of 1868/69, took shape in a rented gardener’s cottage in Søllerød around 25 kilometers north of Copenhagen close to the Zealand coast in the Summer of ‘68. Come evenings Edvard and Nina would meet with close friends ‘in the one inn of the little town for a glass and a chat’. Among these intimates was the Norwegian pianist (and dedicatee) Edmund Neupert, who gave the premiere in Copenhagen, 3 April 1869, and may or may not have had a hand in the first movement cadenza (the American James Huneker maintained that he did—Steeplejack, Vol II, New York 1920). ‘Your divine concerto,’ he reported, ‘resounded in the great hall of the Casino … Even as early as the cadenza, the public broke into a real storm. The three dangerous [sic] critics—Gade, Rubinstein [Anton, who made his own piano available for the occasion] and Hartmann [Emil, Gade’s brother-in-law]—sat in the stalls and applauded with all their might. I am to send you greetings from Rubinstein and say that he is astounded to have heard a composition of such genius.’

In Rome in April 1870 Liszt famously sight-read it with growing elation and lavish praise (if a shade fast for Grieg’s taste). ‘Carry on, my friend, you have the right stuff in you … don’t ever let them frighten you!’ On its Leipzig premiere conducted by Reinecke (Gewandhaus, 22 February 1872), the Germans weren’t so enraptured. ‘Not created in a happy hour … Scandinavianism entangled with Schumann and Chopin … unhappy and ungrateful’ (Signale). ‘Lots of colour but little thought … mixtures of major and minor by Gade, Mendelssohn and [Rudolf] Willmers with a little Weber and a lot of Liszt’ (Neue Zeitschrift für Muzik). Yet it was a German pianist, the young Wilhelm Backhaus, who was the first to record it, in London with Landon Ronald—a heavily truncated version, further omitting the slow movement (1909). Following several rejections, the music deemed insufficiently interesting, it was finally pushed through published in Leipzig in the autumn of 1872, with subsequent revisions ensuing (the last one, July 1907, calling for four rather than two horns).

Grieg’s primary model was Schumann’s same-key Concerto, which he heard Clara Schumann play in Leipzig, ‘every tempo indelibly marked in my soul’. (Towards the end of 1858 he suggested in his diary late in life—the Gewandhaus archives showing, however, that she actually didn’t appear that year, her next programming of the work not being until November 1860, with Reinecke.) Structural similarities and shared gestures are plentiful (the descending opening flourishes for one). But also differences. Schumann’s Chopinesque first movement interlude Grieg transfers to the F major episode of his folkloric finale. And his Intermezzo is replaced by Grieg with a D flat Adagio more aria-like, decorously fragile in beauty and character. Both works incorporate developmental first movement cadenzas integral to the design. Grieg’s is on a thunderous iron-frame scale, the A minor and C major climax points tellingly marked ffff in the stichvorlage (Oslo University Library), contrasting the printed editions. Seven octaves of clangourous sonority, bottom A to top, open and close the first movement. And comparably dazzle the Jovian peroration of the finale that so caught Liszt’s imagination, the closing bars an intoxicating mix of plagal cadence and ascending mixolydian scale, G naturals blazing forth.

Sergei Rachmaninov Piano Concerto No 2 in C minor Op 18
Rachmaninov’s C minor Concerto (Ivanovka, autumn 1900-April 1901) was the comeback success that restored his confidence and self-worth following several years of clinical depression in the wake of the 1897 failure of his First Symphony. Key to his recovery was his hypno/psychotherapist, Nikolai Dahl, Paris-trained, an amateur viola player to whom he dedicated the score. He premiered it in Moscow, with his cousin, Alexander Siloti, conducting, 27 October/9 November 1901. A Glinka Award, chaired by Rimsky-Korsakov, Glazunov and Lyadov, followed in 1905. Later in life, exiled in the United States, he recorded it twice with Stokowsky and the Philadelphia Orchestra (1924, 1929).

Romanticism’s virtuoso concertos all open distinctively: Grieg’s drum-roll, the ascending chords of Tchaikovsky’s First, the imperious rhetoric of Liszt One, the baroque styling of Saint-Saëns’s G minor. Rachmaninov’s Second, a Slavic life journey from darkest minor to whitest major, likewise asserts its identity, with eight ‘subdominant’ bars of unaccompanied crescendo leading theatrically into the fortissimo exposition, F minor to C minor—an exordium of basaltic chording (‘a sort of monument to the massive tones of a Steinway or a Bechstein concert grand’, Wilson G Lyle fancied in the late 1930s), pedal-point low Fs, and wide unbroken hand stretch (Rachmaninov’s span, according to Sats, was a thirteenth, C to A). Tonally manoeuvred ‘introductions’, architecturally, are intrinsic to the dynamic. A telescoped variety, related to ‘preluding’, unlocks the central Adagio, this time four orchestral bars modulating from C minor to E major—curiously redolent of the four bars transitioning E to D flat commencing the Largo of Dvořák’s New World Symphony. Beckoning homewards, an extrovert E major-C minor bridge ignites the finale. Like Grieg and Tchaikovsky, Rachmaninov favours temporal fluidity, his lyric chapters tantamount to poems from the heart, love and lovers incarnate. Unlike them, though, he dispenses with a cadenza in the first movement, transferring the semblances of one to the second, rounding off its brisker middle section. The finale’s murmured orientalisms recall, more smokily, the ‘Eastern’ cameos of Rubinstein’s Fifth Concerto, while its ‘big tune’ C major coda takes its cue from the same point in the B-flat minor Tchaikovsky, down to the prefatory cadenza carillon of 6-5 As and Gs exactly mirroring that work’s octaved Gs and Fs. One of the great crowd-pleasing finishes of the repertory, triumphantly heroic.

We are pleased to release this companionship of concertos, the Grieg Piano Concerto, and the Rachmaninov Piano Concerto No 2, as part of a special series of recordings—a trilogy of concertos—that took place at Abbey Road Studios in November 2019, featuring pianist Tedd Joselson and conductor Arthur Fagen, produced by Adrian Peacock and Manu Martin.

The legendary Tedd Joselson had been in retirement in New York for some 15-20 years, when I first approached him in the spring of 2017.

My intention was to seek Tedd’s validation of an idea to create an orchestral piece, the Fantasy of Companionship, based on 15 original songs written for a musical Alan.

We set out to lunch in a cosy, cottage restaurant, La Panetiere, in the historic town of Rye in upstate New York. It was an elegant three-course meal, inspired by the spring berries in season. By dessert, I had described my project Alan the Musical, about the future of companionship between human and inanimate, and my inspiration for an orchestral piece, the Fantasy, to be composed by Manu Martin of Bordeaux, France, based on the songs of the musical.

Tedd Joselson agreed to come on board the project as solo pianist, and by the end of summer, I had been treated to some of the most beautiful piano concertos played by Tedd in his Singapore home. Two that stood out were the Rachmaninov Pian Concerto No 2 and the Grieg Piano Concerto. Tedd would weave in and out of these concertos while building his relationship into the Fantasy, which he insisted on naming the Lim Fantasy of Companionship for piano and orchestra.

When the time came to discuss the Fantasy’s recording, Tedd Joselson suggested that he would play a trilogy of concertos, the Grieg Piano Concerto, the Rachmaninov Piano Concerto No 2 and the Lim Fantasy, each with a different orchestra, the Royal Philharmonic, the Philharmonia and the London Symphony Orchestra; distinct pieces each with different orchestras, featuring the maestro himself, and conductor Arthur Fagen.

It was a massive undertaking for a young team, the Alan team, under project manager Matthieu Eymard, as we set out to record two concertos and a Fantasy at Abbey Road Studios in the autumn of 2019. Arriving from far and wide, the team included composer of the Fantasy Manu Martin, also co-producer with Adrian Peacock for the series of recordings; executive producer Deepak Sharma, who seamlessly facilitated this undertaking; Christina Teenz, co-creative director alongside myself; sound engineers Stephane Reichart and Stefano Civetta, assisted by Freddie Light and Chris Parker; the Alan team of artists, composers and musicians; a team of videographers; Karen Pitchford, Publicist; and the able and efficient assistant managers, Olivier Fabre and Cathy Fechoz, who, among many other duties, organized the Harrods cakes at tea-time, and champagne at the end of the recordings.

All three recordings journeyed across the Atlantic to be mastered by Greg Calbi at Sterling Sound Studios in January 2020, just before most of the music industry came to a grinding halt with the arrival of the covid pandemic.

A year on, the team has emerged, stronger, held together by our trilogy of concertos which we can finally share with the world in 2021.

The Lim Fantasy of Companionship for piano and orchestra was launched first, in April 2021, as we realized of course that the three recordings would not fit on to a single CD, but also that the Fantasy, inspired by a futuristic theme, did not belong in the classical era of the two concertos, but to the present.