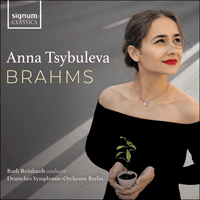 Anna Tsybuleva has a special affinity to the music of Brahms, having previously recorded the Op 116 fantasias. For this her debut concerto album, she turns to the same composer's monumental No 2.

For many, Brahms’s second is the grandest and most satisfying of all piano concertos, uniting classical discipline and romantic freedom to an unprecedented degree. Yet the initial response to a concerto of seemingly limitless demands both technical and musical, or perhaps I should say physical and spiritual, was more baffled than enthusiastic. As in Brahms’s first concerto the soloist was confronted with outlandish difficulties yet remained essentially primus inter pares—a form of chamber music though on a massive scale. Why was the pianist not more obviously prominent in the style of previous Romantic piano concertos, in the chandelier glitter of Hummel, Thalberg and Henselt, quite apart from Chopin and Liszt? Composers in particular listened askance. Debussy’s characteristic sarcasm—the product of a deep-rooted insecurity—knew no bounds, thus 'let’s leave, he’s about to start the development', while for Poulenc, more tersely, 'too long, too heavy'. Liszt attended the first performance, with Brahms as the soloist, and blending praise with caution found the concerto: 'A little grey in tone, though with thought and feeling moving in noble harmony.' Clearly he sensed how the public would hardly warm to music that seemed opaque and the reverse of a more obvious virtuosity. And that is leaving aside the vitriolic Tchaikovsky ('Brahms, what a giftless bastard') or the condescending Lalo ('he’s not a grown-up composer. We would say to him, "you have some talent, but go back as soon as possible to the class room".') Tchaikovsky’s savagery in particular finds its literary equivalent in D H Lawrence on Jane Austen ('that narrow-gutted spinster'). Today such comments, while woefully wide of the mark, seem both comprehensible and inevitable; a price paid by all musical innovators and pioneers.

Then there was the question of the solo part. Brahms was not without a sardonic sense of humour. He had heard an inadequate performance of his first concerto by a lady pianist and vowed to write one that no lady could play: 'a tiny, tiny piano concerto, with a tiny wisp of a scherzo.' His joke was not without irony and he would have been surprised at the range of lady pianists who have responded to his misanthropy, his throwing down the gauntlet. Brahms’s second is in the repertoires of several women pianists of the past; Myra Hess, Clara Haskil, Annie Fisher and Alicia de Larrocha (briefly and reluctantly) and today Anna Tsybuleva joins those who scorn Brahms’s intimidation. Not for them a surplus of testosterone or a sense of writing that is never comfortable, that never lies easily under the hand.

Nor is there a grateful gratifying of a more traditional and transcendental virtuosity. Brahms is transcendental in a radically different, more inclusive and profound sense. Such writing is worlds apart from say, the once celebrated French jeu perlé; playing exclusively on the surface, the fingers uncomplemented by arms and shoulders and, indeed, with full body weight. Mere facility could hardly be more alien than in Brahms. Not surprisingly the French took issue with what they saw as misplaced grandeur, though regarding an older generation of pianists the Concerto was, enterprisingly for the times, in the repertoire of Robert Casadesus. On the other hand Brahms’s second has been prominent in the programmes of the greatest Russian pianists, in a work where their training towards an all-encompassing command shows to the greatest advantage. Central to the repertoires of Richter and Gilels, it was also performed and recorded by Horowitz, albeit under duress, under the insistence of Toscanini, his formidable father-in-law. He also admitted to a dislike of Brahms—of music that failed to reflect his own distinctive edge and wizardry.

The first movement Allegro non troppo opens with a horn call and a promise of epic things to follow. Yet the pianist’s gentle and caressing reply and the following brief tutti hardly prepare us for the pianist’s massive cadenza, when he unleashes writing of a daunting opulence. Again, nothing is comfortable—there are absolutely no concessions. Not surprisingly as the concerto gained in awe and appreciation even the most academic of writers felt moved to poetic analogy. For Donald Tovey there is that moment in the first movement when you seem to hear 'the beating of mighty wings'.

Brahms may have mischievously referred to his second movement, Allegro appasionato, as a scherzo, but if scherzo means a joke then this is no joke. The piano’s fierce upward thrust opening sets the tone. There is an octave- and double-note passage to test the technique of even the most formidably equipped pianist and the movement ends in a mood of fist-shaking defiance.

The Andante acquires a second soloist; the cellist’s introduction of a surpassing and elegiac beauty before the pianist replies with a slow and mesmeric upward spiral of sound. This is later complemented, after rhetorical storms, with an oasis of calm, of widely spaced figuration leaving an unforgettable feeling of vast and starry spaces.

The concluding Rondo, Allegretto grazioso, offers yet another surprise, an alternation of dancing lightness and the more familiar heft and grandeur of the first two movements. For Tovey it was 'that great and child-like finale'; one that ends in a blaze of glory. Only Busoni’s five movement piano concerto exceeds Brahms’s second in length, but even so the sense of scope and scale is less. Brahms’s second concerto, an ultimate masterpiece of lyrical grandeur, remains unique in the musical Parthenon. One that, in Michael Tippett’s words, requires 'that great effort of interpretation'.

There are no more recondite or romantically introspective works in piano literature than the sequence of Capricci and Intermezzi composed by Brahms in his old age, a both radiant and troubled reflection of time’s past and of a lifetimes experience. Opus 116-119 were published between 1892-3, but the earlier set of opus 76, published in 1897, belong very much in a related idiom and category. Here is the same alternation of anguish and rapture. No 1 in F sharp minor is a short yet epic journey, the opening billowing figure building to a storm in a few bars before the launching of a theme of that bitter-sweet flavour so central to Brahms’s heart and mind in his later years. Dedicated to Clara Schumann, it forms an unforgettable opening to what has been aptly described as 'an inexhaustible treasure-trove of masterpieces', and for Brahms’s beloved Clara a profoundly expressive alternative to Liszt, a composer she found too full of 'the tinsel and the drum'. She also found this Capriccio exceptionally difficult both technically and musically, conjuring up 'a desolate unkempt cemetery'. This is followed by a Capriccio of dancing lightness, a miniature prophecy of the second concerto’s finale, reminding you once more of Brahms’s love of Hungarian gypsy music, its principal idea caught up in an intricate web of syncopation. Finally, No 8, the Capriccio in C major closes the set in an uplifting mood of optimism, though Brahms would not be Brahms if such joy was not shadowed by an unease resolved in a final emphatic and triumphant close.

The three Intermezzi of opus 117 have been described as 'autumnal landscapes of poetry entirely in half-tints and chiaroscuro'. The first, a Berceuse, is prefaced by words from a Scottish lullaby, ‘Belau, my boy, lie still/ It grieves me sore to hear thee weep’ mirrored in a ‘haunting and muffled poetry.’

The Intermezzo in A major, opus 118 No 2, is a work full of Brahms’s love of heart—warming thirds and sixths. No less typical is the development of the principle theme, a sudden twist into the minor key, a short hymnal blessing and an elaboration of the theme in partial cannon.

Small wonder that Schumann, most perceptive and exuberant of critics (to recall his salute to Chopin, 'hats off gentlemen, a genius!') with his reverence for Brahms and his love for Clara found such music full of 'wondrous things', the piano’s seeming limitation transformed into an array of 'wailing and jubilant voices'. Small wonder, too, that music which haunts and presses on the imagination should have prompted eloquence and evocation from the poet William Ritter. For him late Brahms was like 'the golden lustre of parks in autumn, and the austere black and white of winter walks'.

Summer 2015. I play a lot of Brahms, read about his life, his letters, the creation of his works. I live and talk with him through his music, seeing his personality in phrasing and harmonies. He shares the most genius and personal thoughts and philosophical ideas. I search and find answers in his scores … I live with his music in my soul, I hear it in my head whilst on the train, in the park, or having a cup of coffee with croissant in a cafe on the street.

And suddenly, I read that Brahms has died.

“What? Wait! It cannot be! I played his Concerto this morning, he was fine, he was in his prime!”

This thought struck me! In that moment I felt the incredible fantastic power of music on me. It connected us through the ages, through space. It was real magic …

It was then that I had a brave idea to make a recording of the Second Piano Concerto and some solo pieces, in the hope of capturing this magic and sharing it with other people somehow.

January 2020. The dream came true: a recording of my beloved Brahms with the DSO Berlin and Ruth Reinhardt. The entire process was fantastic! Ruth and I were entirely of one mind in our approach to Brahms’s music. When we started to rehearse, it was as if we had been playing together our whole lives … We almost didn’t need to talk—we just played.

It was also a blessing to have our expert producer/sound engineer, Christoph Martin Frommen. He not only created a wonderful atmosphere, he read my thoughts throughout the process. This recording would not be so special without him.

Summer 2020. Pandemic. The world is depressed and unmotivated. I play a lot of Brahms, I read about him, and I listen to the edits of our recording whilst walking in the mountains in my homeland during lockdown. Day by day, step by step, I begin to feel better. I thank Brahms for his acceptance and consolation, for his faith in the world, people, and the future, and for the strength of his spirit and love expressed through music.

This recording would not have been possible without the generous support, organisation, and work of the following people: Adam Gatehouse and the Leeds International Piano Competition; Notenstein La Roche Privat Bank; Vontobel Bank; the kind people at Yamaha Europe and their beautiful piano; my wonderful managers, Stephen Wright and Alexandra Knight (Knight Classical); and of course the amazing Steve Long and his team (Signum Classics).

Most of all, I give thanks to Brahms—and hope that through this recording his music can touch your life as it has mine.