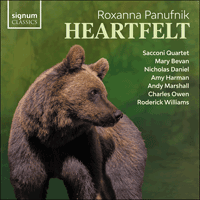 Featuring a stellar line-up of leading British soloists (including soprano Mary Bevan, pianist Charles Owen and baritone Roderick Williams) and led by the Sacconi Quartet, the title work of this album includes a musical translation of the heartbeat of a young European Brown Bear named Albie … 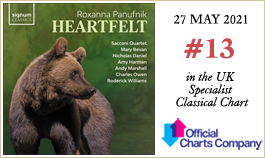 Since Westminster Mass (2000) established Roxanna Panufnik’s firm place among today’s leading British composers, she has often been celebrated for her choral music. Her instrumental and chamber works, however, are equally striking, filled with dazzling imagination and poetic lightness of touch. This music encompasses compassion, tragedy and irresistible humour, while demonstrating her passion for exploring diverse musical cultures, from East Sussex to Myanmar.

The song cycle Private Joe was born when the baritone Nigel Cliffe approached Panufnik with two letters written by his great-uncle, Private Joe Wood, during World War I. They were sent, six days apart, to Joe’s sister Mary (Nigel’s grandmother) and her husband Tom, three weeks before Joe was killed in action at Passchendaele in 1917. Their tones were so different that Cliffe and Panufnik were curious about what had happened in the brief intervening time. Panufnik consulted a graphologist, who suggested that Joe was stubborn, determined and emotional but repressed, with a tendency to depression; his experiences at war were beginning to make him lose control by the time he says in the second letter, '… as you know Mary we boys want looking after, as we are in France fighting for you at Home'.

To fill in the mystery, Panufnik chose three 'chapters': a traditional trench song ‘And when I die’ (desperately jolly), Wilfred Owen’s ‘The Letter’ (transition from light to disastrous) and Alec Waugh’s ‘From Albert to Bapaume’ (utter desolation)—coincidentally written at the same time, August 1917, as Joe’s first letter. The piece is dedicated to Nigel’s father, Joe Cliffe, who was named after Private Joe. It was commissioned by Warwick Arts Society for the 2000 Warwick & Leamington Festival with funds provided through the Regional Arts Lottery Programme by West Midlands Arts.

The viola solo Canto was written as a set piece for the Lionel Tertis Viola Competition in 2019. Taking as inspiration Tertis’s Jewish background in London’s East End, Panufnik selected as its base an Ashkenazi Jewish Cantorial chant 'Y’hi rotzon' ('May it be Thy will'), an invocation for the new month’s blessing. 'The title evolved out of my admiration for the gorgeously warm ‘singing’ tone of the viola', Panufnik says. It was only after she had chosen the name that she discovered that Tertis’s father had been a cantor at the Princess Street Synagogue in Stepney.

The oboe quintet Letters from Burma was written in 2004, commissioned by the Summer Music Society of Dorset for the Vellinger String Quartet and Dougie Boyd. Noting that the concert would contain Janáček’s string quartet Intimate Letters, Panufnik devised a similarly epistolary work. 'I came across Letters from Burma'a book of 52 letters written by Aung San Suu Kyi to a Japanese newspaper between November 1995 and December 1996', she says. 'They describe every aspect of Burma—its culture, scenery, religion, politics, etc—copious inspiration for a new composition!' Working with John O’Kell, an Oxford University expert on the country’s traditional music, Panufnik was able to assimilate elements of this with great care and devotion.

The first movement is based on a folksong of laudatory benediction about the power and valour of the king, 'Aung-ze Paing-ze'. The whole piece is influenced by this melody and its details, including appoggiaturas, portamentos and quarter-tones. Next, 'Young birds outside cages', is inspired by Suu Kyi’s harrowing depiction (of the same title) of children trying to touch their parents who are political prisoners behind bars: '… young birds fluttering helplessly outside the cages that shut their parents away from them.' The string quartet represents the cold, relentless bars of a cage; the oboe is the child/bird trying to get through. Third, 'Thazin' is a Burmese orchid: here Panufnik evokes the 'tiny exquisite blooms' described by Suu Kyi. Finally, 'Kintha dance' is suggested by images of dance in Suu Kyi’s writing. Chordal interruptions represent the oppressive regime that imprisoned her, 'trying and failing to quench the vivid and irrepressible Burmese spirit', Panufnik says. The military coup in Myanmar in 2021 has now cast the piece in a new and poignant light.

Hora Bessarabia was created as a solo set piece for the senior category at the 2016 Yehudi Menuhin Violin Competition; the duet version with double bass, here recorded, was commissioned by the contest finalist Ariel Horowitz for her and bassist Sebastian Zinca to play. Yehudi Menuhin had loved Gypsy music, which sparked the idea for Panufnik to explore the Romanian and Hungarian Doina and Hora dance form. The piece follows this slow-fast pattern twice, peppered with glistening arpeggiated writing that evokes the sound of a cimbalom. Dramatic accelerations raise the temperature towards the end of each Hora. The piece has become one of Panufnik’s most popular, thanks to its championship by the violinist Tasmin Little.

Cantator and Amanda was commissioned for the Rye Arts Festival 2011. It is a musical love story, based on the 14th-century Rye legend of a monk, named Cantator for his 'divine singing voice', who fell in love with a local girl, Amanda. They attempted to elope, but were caught; in punishment for breaking his vow of chastity, Cantator was bricked up alive in the Friary walls. 'Some believe that Amanda died with him as, over four centuries later, excavation work nearby revealed two entwined skeletons', says Panufnik, 'but I have chosen to portray her death, after Cantator’s execution, of a broken heart.' The bassoon takes the role of the flirtatious Amanda, her theme based on a mix of 14th-century madrigals. Cantator’s calmer music is a plainsong extract from the 'Use of Salisbury', a collection of chant used widely in the area. The quintet follows them through meeting and falling in love, capture and execution, and finally Amanda’s lament.

Written as a solo piece for the Polish pianist Eva Kupiec, Second home is based on a folksong from Poland, which effectively is Panufnik’s second home through the heritage of her father, the composer Sir Andrzej Panufnik. The version for piano quintet and soprano was commissioned by Pro Musica Mundi and premiered in a concert celebrating both Poland’s EU presidency in 2011 and the memory of Andrzej Panufnik on the 20th anniversary of his death. This piece presents four variations on the song 'Hejze ino! Fijołecku leśny' ('Hail, woodland violet!'). The soprano sings the words in their original rural dialect.

The string quartet Heartfelt was commissioned by the Sacconi Quartet in 2019. The quartet was involved at the time in a multi-media experiment in which audiences were connected to the performers’ heart monitors via wi-fi, creating a multi-sensory listening experience. 'This captured my imagination', Panufnik says. 'Music, for me, is all about the heart.'

The first movement, 'Uzbek processional', conjures images of 'a grand and regal caravan of camels and carriages, travelling down the Silk Road'. This, too, is about the heart: 'The court musicians of 17th-century Uzbekistan used to set the tempo of their performances by first feeling their pulse. This ensured their music would have a ‘stately’ start, however ebullient their dance music became', says Panufnik. The movement involves four traditional melodies, the quartet evoking the sound of Uzbek instruments. The dances are superimposed for the ending, then fade into the distance, 'and we’re left with a lonely wind blowing over the plains …'

'Lament for a Bulgarian dancing bear' was inspired by Witold Szabłowski’s harrowing book Dancing bears, describing the rescue of maltreated animals after bear dancing became illegal in Bulgaria. Panufnik wanted to base it on the heartbeat of a real bear—somewhat challenging to source. When her letters to zoological societies proved fruitless, she resorted to a public request on Facebook. A cellist friend who lived beside Bristol Zoo finally made contact for her. As it turned out, a young European Brown Bear, named Albie, was about to undergo a small surgical procedure under anaesthetic, 'which is the only time, for obvious reasons, that you can get to hear a bear’s heartbeat!' Via a digital stethoscope, the zoo was able to supply Panufnik with a recording of Albie’s heartbeat, the anaesthetic resembling the bear’s hibernation. The gentle, slow pulse on one note is a musical translation of the sound.

On top of this is a traditional-style Bulgarian folk melody which the bear-keeper would have played on a gadulka, a stringed instrument with a set of sympathetic strings beneath three to five melodic ones. The quartet recreates this effect by using a leather mute and playing poco sul ponticello with light pressure in the left hand. Finally, as the bear is rescued, his heartbeat elevates in joy.

Albie himself is pictured on this album’s front cover.