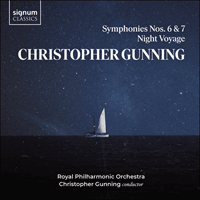 Three quietly programmatic works from a modern master of orchestral mood-making: 'If you wish to express positive emotions why not use straightforward tonality?'

Early in 2010 I moved into a new house in a new area, and in a spirit of optimism set about my 6th symphony. After the 5th, which is in four extended movements and runs for over fifty highly-charged minutes, I felt the need to tackle something on an altogether smaller scale; something simpler, more direct, clearer in its orchestration, and in a way more 'classical' than its predecessors. I would use themes and motifs; it may be unfashionable to do so, but it’s the way I think, and in fact I’ve always been keen to connect with an audience. Is my desire to write the way I do connected to my history of film and TV drama scores? Maybe, because I certainly love drama in music, but there’s a world of difference between a film score and a symphony!

With my 6th, I returned to the idea of a single span incorporating several sub-sections, a form which I had already explored in my 1st, 3rd and 4th. The result may feel more like a tone-poem than a conventional symphony (if there is such a thing nowadays) and I certainly hope the music has a strong narrative to it, but there is no specific story to listen out for; instead there are a number of sections which are all connected in some way.

The trumpet call at the start introduces a simple woodwind figure which is to return at various points of the symphony. It is expanded during the first, slow, section and eventually gives way to a faster ostinato figure in the strings. The ostinato section develops, but after becoming quite forceful peters out, giving way to section three, which has soft sustained chords from the winds, harp and vibraphone against which the strings weave expressive phrases, becoming steadily more intense. Then, after quietly nocturnal solos from the trumpet and clarinet, a perky fugato section begins, which works itself out until the opening figure returns in a much grander form. There’s a brief restatement of the idea from the third section, this time featuring two clarinets, then the music scurries to its close—and finishes with a bang!

I have always been drawn to the sea and spent many years as the owner of a small sailing yacht, pitting my wits against the elements and encountering several near disasters. Night voyage is a sea piece and was born on a rainy evening standing by the Mersey river. To the West, a patch of orange lit the darkening sky, seabirds called mournfully, and I watched a large grey freighter slipping majestically out to sea. Where was it heading and what would befall it? My ship takes an imaginary journey; first there is the optimism of a new adventure, but then we meet a violent storm. As the storm subsides land is sighted and we arrive safely at dawn, battered and bruised, but intact—if chastened. There are obvious parallels with life here; this is really a tone-poem depicting a journey through an emotional crisis to a resolution of a sort.

The theme of journeying is carried through to my 7th symphony. Like the 6th, the music is continuous but this time falls into six main sections, or 'phases', all founded in various ways on the rising whole-tone scale heard at the very start. This affects the harmonic language but the 7th is also the most directly tonal of all my recent pieces. This is not an unconscious development; at this point in the 21st century many composers draw upon influences from here, there and everywhere, and if you wish to express positive emotions why not use straightforward tonality?

I had in mind a long challenging journey; you can imagine the ascent of a high mountain, or something more psychological—fortunately one doesn’t have to be specific, and surely one of the joys of listening is that everybody brings their own life experiences to bear.

Phase one is slow and thoughtful, which you could regard as waking from sleep and pondering the task ahead. A far more active phase follows, mostly optimistic with hints of something heroic. With phase three we enter a mysterious, foggy world with the blurred outlines of mysterious shapes. Phase four, by contrast, is relentlessly rhythmic with a steady pulse, becoming ever more dramatic; the idea of struggling against formidable odds was uppermost in my mind. A short break in tension follows, a prelude to a return of the optimistic music heard in phase two. Again this subsides and the thoughtful, quiet opening music returns briefly. This proves to be preparation for the final main section, with its confirmation of A major, and the summit. At the very end, we hear the quiet rising scales from the opening, this time high in the violins; is this exhaustion? Or perhaps a hollow victory?

I should like to thank many people for their help and encouragement in the recording sessions. Firstly members of the Royal Philharmonic Orchestra, Ian Maclay for organising the sessions, Clio Gould for leading the orchestra, Mike Hatch for recording and remixing the music, Catherine Handley and Paul Bateman for their assistance with score reading, and Sveta Gunning for preparing the orchestral parts. This was a brilliant team.