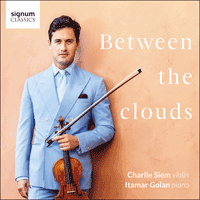 Polish-born and French-trained Henryk Wieniawski (1835-1880) was one of the great violin prodigies of his time, renowned for his blend of Gallic elegance and Slavonic fire. From an early age he became the archetypal wandering musician with gruelling concert tours leaving little time for composition. During a visit to Russia between 1851 and 1852, he completed his Polonaise No 1 in D major, Op 4, a bravura work encapsulating the very essence of his artistic sensibility. Its charming main theme, not without a certain swagger, alternates with episodes of yearning and closes with a final authoritative paragraph.

There followed a period of extensive touring in Europe culminating in a series of concerts in London where, in addition to playing chamber music with the Beethoven Quartet Society alongside Joseph Joachim (who considered Wieniawski ‘the craziest risk-taking virtuoso I’ve ever heard’), he met his future wife Isabella Hampton. To her he dedicated Légende, Op 17, confessing he loved her ‘more deeply than the finest Stradivarius or Guarneri’. Written in 1860, this billet-doux unfolds in poetic fashion, bearing its romantic vein and salon-like composure with consummate ease.

Ten years later, after Wieniawski had returned to Russia for the prestigious position as principal violinist of St Petersburg’s court orchestra, he produced his Polonaise brillante No 2 in A major, Op 21. More complex and expansive than the first, the new work is no less virtuosic, its outer brilliance framed by a more pastoral lyricism yet not without expressive demands.

Leopold Godowsky (1870-1938) was a Polish born, American naturalised wunderkind who won lasting repute for his Berlin debut in 1900. It launched his European career until the outbreak of war in 1914 forced his return to the United States where his family had emigrated in 1884. Almost entirely self-taught, many consider his playing to be unsurpassed to this day, while as a composer he wrote some of the most complex music for the piano yet conceived, prompting Rachmaninov to declare he was ‘the only musician of his age who has given a lasting, a real contribution to the development of piano music’.

His major works include the Passacaglia on Schubert’s ‘Unfinished’ Symphony, the 53 Studies on Chopin Études (deemed almost unplayable by all but the most prodigiously gifted pianists) and a suite of 30 evocative miniatures known as Triakontameron of which ‘Alt Wein’ is among the most popular. Published in 1920 and subtitled ‘thirty moods and scenes in triple measure’, the picturesquely entitled pieces form a series of poignant reminiscences. Nostalgia for pre-war Vienna in ‘Alt Wein’ is made explicit by Godowsky’s suggestive phrase below the work’s title: ‘Whose yesterdays look backwards with a smile through tears’.

The spirit of Vienna can also be also heard in the music of the Austrian composer/violinist Friedrich (Fritz) Kreisler (1875-1962). His recitals regularly included his own pieces, admitting to these pastiches of Corelli, Pugnani, Vivaldi and many others and claiming in 1935 it would be ‘impudent and tactless to repeat my name endlessly on the programmes’. Over fifty years earlier he had been, at seven, the youngest student ever enrolled at the Vienna Conservatory and after further study in Paris enjoyed an international career in Europe and the US where he eventually acquired American citizenship in 1943.

Amongst his compositions there are two operettas and a violin concerto, yet it was his falsely attributed recital pieces for violin and piano that became staples of the repertoire. When Schott published a modest collection of these works in 1910 they sold in their thousands. They include Tambourin chinois, Op 3, a work reflecting the prevailing vogue for all things oriental. Inspired by a visit to San Francisco’s Chinese Theater, this ‘free fantasy in the Chinese manner’ is notable for its ebullience and soulful central episode. Kreisler’s Recitativo und Scherzo-Caprice, Op 6 is the composer’s only known work for solo violin and was written for the Belgian violinist Eugène Ysaÿe. Issued in 1911, its two sections are strongly differentiated; one declamatory and marked by the interval of a tritone, the other a parade of techniques requiring no small degree of virtuosity. It is in works such as the delightful Schön Rosmarin (Lovely Rosemary) where the spirit of Vienna is most affectionally evoked. This exquisite miniature surely breathes the same air as any Johann Strauss waltz, its pre-war charm and melodic gift undeniable. Its appearance in a 1905 collection entitled Alt-Wiener Tanzweisen (Old Viennese Dance Tunes) was deliberately misattributed to Joseph Lanner and included two companion pieces; the uplifting Liebesfreud (Love’s Joy) and the wistful Liebesleid (Love’s Sorrow), both stylish examples of the composer’s elegance.

It was Kreisler who in 1910 premiered the Violin Concerto of Edward Elgar (1857-1934) some ten years after its composer had secured his first major success with the 'Enigma' variations. From that same year (1899) Elgar completed Chanson de matin, Op 15 No 2, a work of considerable freshness and charm sketched some years earlier. Determined to avoid the financial shortfall of his Salut d’amour, Elgar urged Novello’s to take care of Chanson de matin, ‘It’s not much, but don’t lose it [!] because I can sell it’. He later arranged it for small orchestra, and it was first performed in this version at the Queen’s Hall on 14 September 1901. At the same concert appeared his 1897 Chanson de nuit, Op 15 No 1 also conceived for violin and piano. It was originally called Evensong, to reflect its devotional reverie, but Novello’s recommended the commercial advantages of a foreign name to which Elgar somewhat grudgingly responded ‘Chanson de nuit was best, but I dislike a French title’.

Unlike Elgar, the talent of Pablo de Sarasate (1844-1908) was recognised early on when he gave his first violin recital in northern Spain aged eight, later catching the ear of Queen Isabella II whose patronage enabled him to study at the Paris Conservatoire. After solo debuts in the French capital and London, his renown as an international violinist flourished, and his ability to draw large audiences and command huge fees owed much to his technical facility and purity of tone. While George Bernard Shaw was less impressed by Sarasate’s interpretative insights, Carl Flesch asserted ‘The history of violin playing cannot be imagined without him’.

Sarasate’s own compositions were designed mainly to showcase his technique and his 54 opus numbers all feature works for the violin, either with the piano or orchestra. Best known amongst these are the Zigeunerweisen (1878), four books of Spanische Tänze and his Carmen Fantasy (1883). His 1899 Introduction et Tarantelle, Op 43, originally for violin and piano, is a work of considerable appeal and scintillation. Like so many of his works, it is divided into two sections; a slow and eloquent Moderato (where soaring phrases extend across the whole range) yields to a passage of rapid arpeggios that leads to a brilliant tarantella, providing the soloist with an exhilarating workout.

The works of Niccolò Paganini (1782-1840) were also written for himself to play. Hailed by Robert Schumann as the ‘turning point of virtuosity’, his reputation as the greatest violinist of his age was secured after a series of recitals given in Vienna in 1828; thereafter, people flocked to hear him and the promise of his own compositions. Of these his six violin concertos and the formidably demanding 24 Caprices for solo violin are his most renowned. The Cantabile, Op 17—his only piece conceived for violin and piano—abandons daring acrobatics for long-breathed melodic contours, redolent of the opera house, that have conferred lasting popularity.

Paganini’s compatriot, Bologna-born Tomaso Antonio Vitali (1663-1745) established himself as a violinist with the orchestra of the Este court in Modena and as a composer of music for the violin. He is chiefly associated with the Chaconne in G minor, brought to wide attention by Ferdinand David (remembered for premiering Mendelssohn’s Violin Concerto) who attributed the work to Vitali after discovering its manuscript in Dresden’s Sächsische Landesbibliothek. Following a published edition in 1867, Vitali’s Chaconne gradually secured popular recognition through numerous arrangements. Despite unfolding in a typically Baroque manner with a set of elaborate variations on an eight-bar theme over a simple ground bass, its startling modulations to remote keys does much to challenge the authenticity of its creator.

Benjamin Britten (1913-1976) made highly effective use of a chaconne in his String Quartet No 2 in 1945. Just a couple of years before there appeared his first volume of folk song arrangements, including The salley gardens, written during his ‘exile’ in the United States when he and Peter Pears gave regular recital programmes. Britten went on to compose more than 50 folk-song arrangements, elevating the form to the level of art song. The salley gardens is a traditional Irish song whose haunting beauty is much enhanced by its simple, yet imaginatively conceived accompaniment, and perfectly captures the feelings of lost love outlined by W B Yeats. This arrangement for violin and piano is no less intimate.