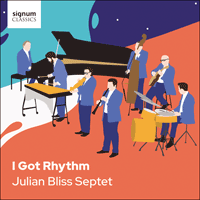 The Julian Bliss Septet was formed in 2010 and quickly became known for its trademark inspiring jazz-fuelled shows which have captivated audiences across the globe. This new album showcases the music of jazz legends George Gershwin and Benny Goodman.

George Gershwin and Benny Goodman were not exact contemporaries as Benny Goodman was about 10 years younger than George, but they were both active during the important years of the emergence of jazz music into the mainstream and contributed to that process in different ways.

Gershwin created ground-breaking fusions of classical music with turn of the century jazz styles, resulting in his unique symphonic style. He also wrote a seemingly never-ending catalogue of popular songs. Benny Goodman, known as the ‘King of Swing’, was a band leader and performer who helped bring jazz to a wider audience—ultimately creating a new ‘pop music’ of the time.

Both Goodman and Gershwin were instrumental in bringing jazz to a global audience. Goodman loved playing Gershwin’s tunes in his famous small group settings, and they also worked together with Goodman playing in the orchestras for the shows Strike up the band and Girl crazy.

George Gershwin was born in Brooklyn to Russian Jewish immigrants as Jacob Gershowitz in 1898. He had an older brother called Israel. The family changed name and the boys became Ira and George Gershwin. George grew up playing in streets like all other kids and didn’t really show an interest in music until age 10. His parents bought a piano for Ira but it was George who actually used it the most. Later in his life he said that his early musical training was mostly coming home from hearing music played live, and doing his best to play it again from memory. Something not every 10-year-old can do!

When George left school at the age of 15 he found his first job as a ‘song plugger’ on Tin Pan Alley, with a brief to give customers a preview of the sheet music to encourage them to buy it. Gershwin earned the princely sum of $15 a week at this job. For comparison, his first published song earned him just 50 cents! George’s first hit was Swanee in 1919. Almost unbelievably, it sold more than two million recordings and over a million sheets of music.

George Gershwin was a master of blurring the lines between jazz and classical. In 1924 George was commissioned to write what would end-up being his most famous piece of orchestral music, Rhapsody in blue.

The perceived brilliance and success of the piece led to him taking a trip to Europe where he wanted to study with eminent classical figures like Nadia Boulanger and Maurice Ravel, but Boulanger refused to help him saying that her classical style would ruin his jazz-influenced style. Ravel and Gershwin met for the first time when Ravel travelled to the USA and the respect between them was clearly mutual. Ravel famously rebuffed George’s request for composition lessons by saying: 'It is better to write good Gershwin than bad Ravel, which would happen if you worked with me.'

Gershwin was very outgoing with a magnetic personality. He was fond of parties, and the longer he was left to play, the better he liked it. Hosts and hostesses would often take advantage of his generosity. When his mother cautioned him about overdoing it, George replied, 'You see, the trouble is, when I don’t play, I don’t have a good time!'. Despite his short life, George wrote more than 17 musicals for Broadway, several film scores and dozens of hit songs which have become part of the jazz standard repertoire.

In 1936 George developed some strange symptoms and started behaving oddly. Doctors dismissed his concerns at first, but following a collapse he was diagnosed with a brain tumour and passed away during an operation at the age of only 38.

Even though George left the world at an early age his music exhibits his lasting greatness. Contemporary musicologist Hans Keller stated: 'Gershwin is a genius, in fact, whose style hides the wealth and complexity of his invention. There are indeed weak spots, but who cares about them when there is greatness?'

Benny Goodman was born in Chicago in 1909 into a Jewish immigrant family. At the age of 12, Benny and his two older brothers started taking music lessons at a local synagogue. Benny became an accomplished clarinet player fairly quickly and was taken with the New Orleans Jazz sound. At the age of 16 he was already part of Chicago’s biggest jazz band, the Ben Pollack Orchestra.

Benny started his playing career as a session musician but in his early 30s he decided he wanted to be a band leader himself. Benny’s most famous long-term collaborations were with Teddy Wilson, Gene Krupa and Lionel Hampton. His first group was just a trio with Wilson on piano and Krupa on Drums, but in 1936 he heard Lionel Hampton play and was very impressed with his lightness of touch and rhythmic accuracy which perfectly complemented Goodman and Wilson’s style. Goodman was probably most well-known for his Big Band, but he frequently performed and recorded with small groups with anything from three to seven or so musicians.

On 21 August 1935, Benny Goodman started a run of performances at the Palomar Ballroom in Los Angeles. With the evening not going to plan and with little reaction from the audience, Benny decided to play some original arrangements which the audience loved. This concert went down so well that is has been described by some as the beginning of the swing era.

One of the most famous concerts in jazz history took place in January 1938 in Carnegie Hall. This was the first time that jazz of this calibre had been played in what was considered the home of classical music. Goodman was reluctant to do the concert at first but in the end he was convinced. The concert sold out and Goodman’s band were the stars. He was a perfectionist and demanded the absolute best from the musicians he worked with: sometimes regarded as being difficult to work with, this drive for perfection made his band the envy of others and one of the most revered of its time.

In the late 1930s Benny decided he wanted to start playing classical music. He took lessons with Reginald Kell and frequently met up with other classical clarinettists. He re-learnt his entire technique in order to play classical: he changed his embouchure, had finger calluses removed and learnt new techniques. Like anything Benny did, he wanted to do this properly and thoroughly.

He commissioned a number of composers to write pieces for him, many of which have become firm favourites in the clarinet repertoire.

Benny Goodman’s career spanned six decades and had a profound impact on popular music and the importance of the clarinet in jazz and classical music. Some people believe that there wouldn’t have been a swing era without Goodman. He brought the instrument to a completely new audience and thousands of youngsters around the world were, and continue to be, inspired to play the clarinet because of him.

Ten years ago I made the decision to start playing jazz. I had always listened to it, admiring the incredible artistry alongside such a relaxed musical approach and ability to improvise, but had never imagined myself playing any. That all changed when I started getting into the music of Benny Goodman (what a legend) and eventually put my own band together.

Being able to work and create music with some of the most phenomenal musicians on the London jazz scene is so much fun, and over the last 10 years we have been lucky enough to tour all over the world, with our first programme largely-based on the music of Benny Goodman. As we started to explore more music together, George Gershwin came up over and over again. It was not only the huge list of fantastic works that appealed to us, but also his love of both jazz and classical—just like Benny Goodman. Some of his greatest compositions could claim to be either classical, jazz or both genres and so we wanted to create a show to celebrate this rich seam and common ground.

This album is a combination of some of our favourite tunes to play and listen to. Some were composed by the great George Gershwin and we’ve included other tunes that Benny Goodman was associated with throughout his whole career. I am so incredibly lucky to have Lewis, Martin, Neal, Colin, Tim and Ed in the band. Not only amazing to work and collaborate with, but great friends too. There are no dull moments when we are on stage or on tour and I would like to think that comes across during our performances. So, here we are, eight years later and back with a second album!

Thanks & Acknowledgements
In writing a word of thanks to the people who have helped to make this album possible, I would like to start with my incredible colleagues, friends, and fellow-musicians in the band: Lewis Wright, Martin Shaw, Neal Thornton, Tim Thornton, Colin Oxley and Ed Richardson. My appreciation and admiration for their stellar musicianship through every single moment, is matched by my thanks for them always being there to help, share ideas and most importantly being amazing friends. I couldn’t think of better people to be on tour with than those six.

I am indebted to my incredible managers Claire and Meg. Having worked with them for a number of years, they are constantly working to create and cultivate opportunities all over the world for not only myself but us as a group. I enjoy every single moment working with them and am staggered by the tenacity and drive they both show. I must also pay a huge thanks to Steph Carlesimo and the team at IMG Artists in New York for organising our tours in the USA. Being able to travel across many of the beautiful states in America, playing great venues and for some huge audiences is a dream come true.

There would not be a recording without Steve Long, Mike Hatch and Signum Records. They are some of my favourite people in the whole industry. Being able to record for such a label is a pleasure and I thank Steve for his willingness to allow me to pursue various recording projects and ideas. Mike is an engineer like no other. A true master at what he does. I always ask for Mike whenever I record a new album and I'm very thankful he was part of this one too. I would like to thank our producer Miles James for his ongoing enthusiasm, attention to detail and also some nuclear grade coffee! It is always a pleasure to work with a producer that shares the same vision and idea of sound.

My brother, Adrian, came and spent two days in the studio with us to capture some video and photographs during the sessions. A big thank you to him for giving up his time and sharing his creative skills. We are looking forward to being able to release some videos to go with this album and hope you enjoy the behind the scenes photos.

Lastly and most importantly I want to thank my Mum. None of this would be possible without her. There are no words to express how amazing she is.